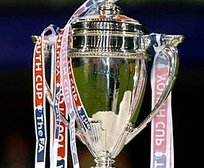 A 4-1 success over their Suffolk rivals takes Ware into the competition proper of the FA Youth Cup in which they will travel to meet Football League side MK Dons.

Tommy Shepherd, who scored a hat trick in the first qualifying round game against Grays Athletic, did it again in this 3rd qualifying round match. Needham had won three games previously in the competition including a 15-0 success at Fakenham Town but the young Blues went in two goals to the good at half time before Shepherd completed his hat trick in the second half.

Needham Market then pulled a goal back but a late penalty scored by Tom Weald sealed the victory for Ware.