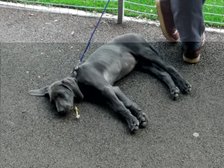 Dog Day afternoon will at least have helped fitness levels.

The problem faced by non-league sides at this time of year is that without many or even any contract players some at least of the team will be away on holiday or other commitment. That was the case for Ware at Wodson Park leaving Paul Halsey to juggle his resources and give new and fringe players their chance to shine.

Ware went to three at the back in the first half and then switched to four after the break but with Patrick Adamson, Tom Bruno, Liam Hope and Calum Kitscha all absent it is hard to know how much was learnt from the exercise. Harry Norman went to left back and new signing Dajour Buffonge, the Montserrat international, came in on the right. Buffonge needs time to settle at his new club but one run forward ending with a shot just before half time showed what he is capable of. Norman was moved to his normal right back role in the second half when Reece Crowter came on.

Both sides seemed generous in defence in the first 45 minutes with Louis Rose giving Ware the lead from a powerful header on 14 minutes as the Wingate defence looked on. Seven minutes later the scores were level as Morgan headed a right wing cross beyond Butler in the Ware goal.

In another five minutes Ware had the lead again. A home corner was partially cleared to Tobi Adekunle and his cross was volleyed home from close range by Olu Akinsanya with more Ware players around him than defenders. It was all square again after 32 minutes when Eadie was allowed too much room on the left and scored under Butler's dive.

Ware might have regained the lead from a 36th minute penalty but Tom Boxer seemed just too casual with his approach and skyed the ball over the bar.

The second half saw plenty of changes from both sides with the visitors swapping six players at the three quarter point of the game. Certainly the premier division side had more of the play in the second period but could rarely get a shot on target. Ware had their moments especially with a neat interchange between Jordon Watson and Akinsanya which might have brought a goal but doubtless everyone was happy enough with a draw after ninety minutes.