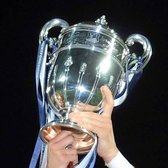 500 up as Ware progress in the Senior Cup

Both managers chose to rest some players for this game. In Ware's case this allowed starts for Liam Dulson, Rechan Esprit and Reece Crowter. In a match where the advantage swung from one team to the other they played their part, not least when Dulson was the provider for Esprit to score the opening goal after 34 minutes, poking the ball home in a crowded six yard box. It was Ware's 500th Senior Cup goal since the first in 1893.

But it wasn't just the young guns; Tom Bruno had another good game, spraying passes wide for Crowter in particular to work down the left. One opportunity, shortly after the break, saw the young number eleven work his way skilfully to the by line before laying the ball back for Pat Adamson to shoot. Only a good save by Hafed Al Droubi prevented Ware going further ahead.

The game ebbed and flowed, and the home side were by no means out of it. Ware's opening goal had come against the run of play at the time, not least when Brad Robinson was briefly left facing two opponents yet somehow held them off until help arrived and the threat was averted. Amine Sassi was also causing trouble with his speed and close control but he was rarely able to deliver a telling pass and was substituted in the second half.

A rash moment from Sydney Ibie, who had also looked dangerous, saw him red carded two minutes before the break for a retaliatory kick after a Bruno foul. Doing that almost in front of the Ware bench ensured that the referee's attention was drawn to the incident though it was unnecessary, Mr Gibson had a good game and was on the incident immediately.

The numerical difference ultimately told against the home side and by the last 15 minutes of the game Ware were in control though their second goal might also have had something to do with it. Bruno's 73rd minute free kick was cleared to the edge of the Scholars' area and Dave Kendall was there to shoot home.

Just as well really as the home side had continued to look threatening and might have equalised a few minutes earlier when Robinson attempted a clearance and missed the ball completely. Corey Parchment sought to capitalise but Ware escaped when his shot from wide hit a post.

It was far from the only chance that the Scholars had. Immediately after the opening goal a quick break required a good save from Robinson, a feat he repeated in the final moments of the game, this time tipping a shot over his crossbar. Al Droubi, his opposite number, also had a good game, following up on his save from Adamson with another to deny Bruno on the hour mark.

Ware now meet Enfield at Wodson Park in the next round on December 7th but for the moment will be thinking about Saturday's league game at St Neots. Taufee Skandari, rested for this match after a knock in the game against AFC Dunstable, will be fit for that important encounter.