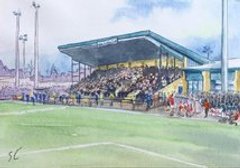 Another late goal to give Ware a second chance.

Goals at the beginning and end of this game bracketed a close match that, whilst not perhaps a great game of football, was ultimately hugely entertaining and stirred the crowd to levels of excitement not seen at Wodson Park for some time.

Harriers monopolised possession for periods in this game, especially the first half, but whether this was canny build up play in a bid to find an opening or an inability to come to terms with Ware wasn't clear. Arguably it didn't matter as Kidderminster already had the lead and could afford to bide their time. In the first minute Jaiden White had crossed the ball from the right to Sam Austin who laid it across the penalty area with the home defence looking on before Amari Morgan-Smith clipped it into the net off the cross bar.

Ware did have spells when they took the initiative not least when they responded quickly to that opening goal. Marcus Milner's cross was headed wide before Robbie Buchanan was put through a few minutes later with just Luke Simpson to beat but he shot straight at the keeper. Later Taufee Skandari's run down the left culminated in a cross into the area where Liam Hope met if first time to send the ball just high and wide of the intersection.

Much else of the first half saw Harriers continuing to probe and Ware launching long balls for their fast men to chase though the increasing rain didn't help as players lost their footing in the slippery conditions. All this activity was punctuated on fifteen minutes by an injury to the visitors' Joe Foulkes who had to be stretchered off the pitch after a tackle to be replaced by Alex Penny.

There was the expected improvement from Ware after the break and, kicking towards the home end, they began to see more of the ball. Ware even put it in the net at the mid point in the half only for it to be ruled offside whilst a Pat Adamson shot was blocked and Louis Rose had a header cleared from under the bar whilst there was a good case for a penalty when the ball hit the outstretched arm of a defender.

This did seem to instil belief in the team who enjoyed a good period after that before a key moment as Harriers were awarded a free kick just outside the Ware penalty area. Ashley Hemmings' effort cannoned off the Ware crossbar and was eventually scrambled away. A second goal then would almost certainly have wrapped the game up for the visitors. Instead Ware, grateful to Brad Robinson who finger tipped a Sam Austin shot over the same bar, came back and started to apply more pressure.

Liam Dulson, whose goal in added time salvaged a draw for Ware in the previous round, was brought on but with time running out it looked as though the cup run was coming to an end. Yet the talisman had his effect. The ball was worked up to him with two minutes left on the clock and with little other choice it seemed Dulson struck a low show from outside the area. Simpson got down to it but couldn't hold on and as the ball rebounded into play Leigh Rose beat several defenders to it to shoot home.

After that Ware piled on the pressure through a succession of corners but Harriers were having none of it and dealt with them all. They will be happy to get Ware back to their home territory on Tuesday and will clearly fancy their chances. Ware may yet have other ideas.