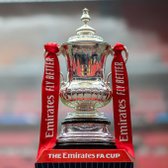 The journey’s over as league games beckon for attention.

This was the first time this season that Ware have conceded three goals. That is the clearest indication of the difference a gap of two divisions can make between two otherwise committed sides. The first half saw Harriers looking very comfortable on their home turf. Long balls forward for Ethan Freemantle in particular opened up opportunities on numerous occasions.

Ware had their moments, starting encouragingly in the third minute. Albert Adu had the supporters behind the Harriers’ goal singing his name after the game’s first shot on target.

Mostly though it was the home side making some good openings even if at this stage they couldn’t find a finishing touch. Several corners and a save from Brad Robinson when he tipped a tenth minute shot over the bar were the closest the home side came. Ware on the other hand were too often left chasing the ball and as a consequence were unable to work it forward with any effect.

It looked like being a long half for the visitors especially when a miscommunication left Robinson stranded out of goal which somehow remained intact thanks to some desperate defending.

It couldn’t last and Harriers’ opener came on the half hour with a deft pass across a stretched defence that left Amari Morgan-Smith with the simplest of tap-ins.

Taufee Skandari’s break and cross offered a brief moment of hope for the Blues but soon after that a Kidderminster corner was dropped into the six yard box where Freemantle swept it into the roof of the net for number two.

Ware had more of the game after the break and good work from Adu and Skandari delivered the ball to Leigh Rose in a dangerous but offside position.

Harriers were now playing from the back, happy to look for openings and in these circumstances Pat Adamson had a good half stifling many of those opportunities.

Paul Halsey made substitutions to try to effect a more significant change and Liam Dulson’s first touch was a shot pushed aside for a corner. Ware were giving a better account of themselves and Robbie Buchanan, escaping the close attention that had shackled him for much of the game with a neat touch past a defender, laid the ball off to Skandari. His shot stung Luke Simpson’s hand but there was no-one to pick up the rebound.

Instead it was the home side who had the last word with ten minutes left. A cross went deep into the Ware box just beyond Robinson’s left post where Alex Penny stooped to head home and complete a trio of goals all scored from inside the six yard area.

It is one of the clichés of the Cup that losing sides are said to be free to concentrate on the league. In Ware’s case there is more to this than mere consoling rhetoric. After two aborted seasons in which they were strong contenders for a promotion place, they won’t want to let a third chance slip away.

A cup run provides some great moments that live for long after but it can also be a diversion from what must be the main task. With the FA Trophy still to come seven matches in the FA Cup have perhaps been enough of a distraction.