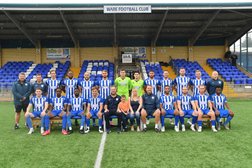 Ware come from behind for a super 2-1 win away from home.

Thamesmead Town: 1. Rob Budd, 2. Michael Spener, 3. Ashley Probets, 4. Jack Hopkins, 5. Lewis Tozer © (James Josh 25), 6. Richard Butler, 7. Sean Roberts, 8. Simon Glover, 9. Tyrus Gordon-Young, 10. Rob Carter, 11. Rashid Kamara.
Subs not used: Leslie Thompson, Hallam Fara, Ross Murphy, Akam Ramadam.
Thamesmead Town made the better of the first half and took the lead in the 33rd minute with a Tyrus Gordon-Young heading home to put Thamesmead Town 1-0 in front.
Ware though came back and had chances of their own with Kieran Bishop who was proving a danger to the Thamesmead Town defence with his pace and shooting with the keeper making some good saves throughout the half.
Ware welcomed back Albert Adu after suspension and he did not disappoint with a powerhouse midfield performance that ensured Thamesmead Town were always kept on their toes, other excellent performances came from Ware’s defensive back four of Skipper Lee White, the solid Gareth Madden, Ajet Shehu and the ever industrious Alaa Oujdi.
Ryan Wade had a couple of free kicks and was unlucky with both kicks just clearing the bar, Kieran Bishop then fired a shot that the keeper did well to palm away.
Thamesmead Town had other chances when Rhys Madden in the Ware goal saved from Ashley Probets and Rob Carter went close late on in the game.
Half-time Thamesmead Town FC 1-0 Ware FC.
The second half told a different story with Ware completely dominating the half and almost immediately levelled the scores in the 47th minute when Khale DaCosta’s through ball down the wing was picked up by Kieran Bishop he ran on to the edge of the box and smashed the ball home from an angle for his sixth goal in the last six league games to level at 1-1.
Ware upped their work rate and Thamesmead Town were finding it difficult to compete and were chasing shadows for long periods, Ware’s Ryan Wade had a free kick from 25 yards out and the ball just about cleared the bar with the keeper beaten.
The Thamesmead Town keeper Rob Budd was very busy and came to the rescue several times as Ware continued turning the screw firing in shot after shot and should have been out of sight but for the keeper, Khale DaCosta also had chances with his attacking and cutting in down the wing and had shots that were hit either wide or saved by the keeper.
Thamesmead Town’s Tyrus Gordon-Young and Sean Roberts tried to make things happen for team and get them back into the game but were well marshalled by the impressive Ware rear-guard and eventually ran out of ideas.
Ware kept up their attacking game and in the 84 minute Ajet Shehu bundled home the ball from a corner to wrap the points up for Ware 2-1.