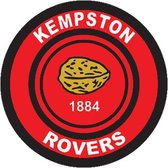 First half display is just about enough for the three points in war of the Roses.

That Rovers were able to launch an increasingly effective second half assault on Ware’s half time lead was perhaps thanks to their keeper George Rose. His 25th minute save saw Leigh Rose’s shot tipped spectacularly over the bar when it looked destined for the net. He did it again when the resultant corner reached Liam Dulson on the edge of the penalty area. Dulson’s powerful shot was somehow parried to safety.

Those who suggested that the keeper didn’t know very much about the second shot and was just in the way of the goal bound effort are discounting the natural instincts of any custodian to get himself in the right place to block anything coming his way.

With Ware already ahead thanks to Leigh Rose’s header from Freddy Moncur’s long ball into the area after 13 minutes a second goal would have given the visitors a cushion from which to continue with the rest of the match.

They would have deserved it too after having had the better of things from the start. Blues displayed good movement with the ball and might have taken the lead in the first minute if Leigh Rose’s shot hadn’t been blocked by a defender. But it was just the initial salvo in the afternoon’s war of the Roses.

Rovers, hampered by the loss of centre back Harry Riley just a minute before Ware took the lead, struggled to keep a hold on the visitors’ use of the ball. One touch football was in evidence as Ware tried to unlock the home defence with some fast passing that switched the play from one part of the field to another. Both Moncur and Marcus Milner caught the eye at this time.

Yet Ware were undone just past the half hour mark when a corner wasn’t cleared and the return cross into their area was met by Seb Simpson who turned it beyond Fred Burbidge to level the scores.

The manner by which Ware regained the lead had an element of fortune about it. Milner met Leigh Rose’s pass but his shot on the turn clipped a defender and looped up and beyond George Rose to find the net. Luck or not, the visitors deserved their half time advantage.

It was just as well because Rovers slowly pulled themselves back into the game after the break. Ware never regained the style of play that typified their first half and it became apparent that they needed another goal to seal a win.

The home side were not going to let them have that luxury and ten minutes into the half had the Ware defence in a muddle with Burbidge somehow scrambling the ball away with his hands and knees. Five minutes later Ben Baker’s cross was skied over the bar from close range by James Hatch as Ware lived dangerously.

Ware were no longer in control of the game and Magloire Muyembe might have done better than shoot wide from a good position before another attack ended with the ball in the net only for Ware to be saved by an offside flag.

Both sides ran through their substitutes with another Rose, Louis, coming on late in the game as Paul Halsey sought to stifle Rovers’ attack with added numbers at the back. It worked but it was a close run thing.

The win gives Ware 27 points from their opening 12 games, three points better than they had from the same number of games last season.