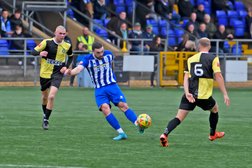 If you take over as manager of a team that has been struggling in the league the default approach is to set about your defence and stop them conceding goals. Jack Wells, newly installed as the Aylesbury top man, seemed to be approaching this game with that objective in mind. Apart from Josh Williams’ shot on seven minutes that brought a good save out of Jack Hopwood, Ware made heavy going of trying to break down the visitors’ defence.

Even by that early stage Blues were without Renée Howe who had suffered a hamstring injury in the fourth minute and was replaced by Jack Vasey. Vasey, still without a start in the league had pretty much all of the game to prove himself and did so in the second half when he scored Ware’s second goal, albeit that the shot was helped into the roof of the net by an Aylesbury defender trying to clear it.

So Ware, also missing both Dan Rumens and Richard Bryan rested with knocks, can perhaps blame their first half inability to break down the opposition on the enforced alterations to their line-up. Louis Rose was recalled to centre back and Marcus Milner is a more than adequate replacement at right back but his real value is in midfield.

There is also no wide man as such. Liam Dulson plays out on the left but there is no speedy winger in Paul Halsey’s arsenal. Someone to carry the game to Aylesbury and get in behind the defence was necessary in this game. Instead, Ware battered their heads against what, at times, looked like a ten man defence whenever they got as far as the final third.

Too often they had to stop, play the ball back and hope for a new opening to appear. Mostly one didn’t and Ware lived with the danger of an Aylesbury break, never more obvious than in the 18th minute when they were lucky to escape after the ball came off a goal post.

Ware went on to make the best and more numerous opportunities but the Aylesbury defence had their measure and it was clear that the home side was getting frustrated.

As the second half floodlights burst into life so did Ware. It was perhaps typical of the game up to that point that the opening goal was not the product of a slick move but of one player’s ability to convert an unexpected opportunity.

A Ware attack seemed to have come to nothing and the ball was cleared but not very far and straight to Sam Chaney just beyond the penalty area. There was no panic or snatched shot, instead the midfielder chested the ball down, made the most of the available time and space to get himself in a good position and then drove the ball into the top of the net with Hopwood unable to do anything about it.

It was enough to turn the game in Ware’s favour with Aylesbury now needing to change their approach in search of an equaliser. Things didn’t get any better for the visitors when Jordan Jenkins was red carded on 64 minutes for a dangerous tackle on Chaney.

Even so Ware still couldn’t convert their advantage into another goal. Hopwood had already tipped a Josh Williams shot over the bar, before the free kick following Jenkins’ dismissal freed Dulson to put a dangerous looking ball across the six yard area but there was no Ware player close enough to reach it. Now at least Ware were getting the crosses in and the Aylesbury goal was under more continuous threat with at one time a Dulson header turned away for a corner by Hopwood’s one handed save.

With Ware in need of another goal it was not until the 83rd minute that Vasey’s first goal for the club, from a Joel Jacobs’ pass, pretty much secured the victory. Vasey wasn’t finished though and provided the pass that led to Freddy Moncur claiming his first goal for Ware. The Ducks’ defence had been split open by some neat approach work before Vasey pulled the ball back from the by line and into the six yard area for a well-taken goal in the 90th minute. Williams then appeared to have made it four in added time but an offside in the build up ruled it out.