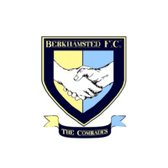 Debutant Ofori fires Ware to victory against runaway leaders in the promotion hunt.

Ware’s response to the challenge this match represented, especially following the disappointing day at Harlow the previous week, says a lot about the team’s morale and resilience. They took the early part of the game by the scruff of the neck to post a two goal lead and clung on to it through a second half when Berkhamsted came back at them with equal determination.

Much of the first half credit must go to new signing Theophilus (Theo) Ofori. He was so new that even his team mates had known little or nothing about his signing from Hadley on Friday. Even so he showed no signs of being a new boy and got stuck in early on, proving how important a wide player cutting through defences can be.

As early as the third minute he exposed the Berkhamsted defence for Ware’s first goal. Laying the ball back to Freddy Moncur he might have had an assist. Instead Moncur’s shot was deflected by Leigh Rose, though how much he knew about it is questionable, to go in the net past David Saunders. So, the assist was Moncur’s and the goal Leigh Rose’s.

Fifteen minutes later Sam Chaney’s perfectly weighted pass released Orofi into the penalty area where he deftly clipped the ball beyond Saunders for Ware’s second. He continued to provide a cutting edge through the rest of the half and if Berkhamsted pressure denied him much sight of the ball after the break supporters hadn’t forgotten his contribution to the win. When he was substituted near the end of the game, he received a well-deserved ovation from the crowd for his debut performance.

There were chances for Ware to extend their lead further not least when Leigh Rose’s cross almost along the goal line must have been millimetres away from Liam Dulson as he stretched to get a contact. But by this time Berkhamsted were hardly bystanders and it was already clear that they could move the ball around well with Oluwatobi Coker the most dangerous of an attacking trio that was rounded out by Ryan Blake and Adam Watkins.

Their ability became more obvious after the break when Berkhamsted played with a skill and confidence that suggested they could undo any Step 4 side. Their one touch football was finding openings in the Ware defence and captain Ryan Kinnane, a towering and commanding figure in their own defence, was also the originator of much of their forward movement. So often he was there to intercept Ware balls forward and return them unfailingly with foot or head to a well-placed attacker.

Berkhamsted looked increasingly likely to score the goal that would turn the match in their favour but somehow they couldn’t. Given this was the eve of the World Cup, one rasping shot that smacked the Ware cross bar and bounced down on the goal line recalled a certain game at Wembley in 1966 but it was cleared and no-one from Berkhamsted appealed that it had gone over the line. Perhaps they felt confident that an indisputable goal wasn’t far off.

If so they had reckoned without Fred Burbidge who snatched the Ware player of the match award from Ofori's grasp with three great, almost instinctive saves from shots that really should have been converted. Much else of Berkhamsted’s forward play was kept at bay by a hard working defence which meant that the visitors were otherwise limited to longer range efforts that were either wide of the mark or straight into Burbidge’s arms. He loved that ball.

As the clock ticked down both Dan Rumens and Renée Howe came off the bench to test their recovery from injury. Both seemed to pass the test to add to the feeling of optimism that was apparent when the final whistle confirmed Ware’s victory.