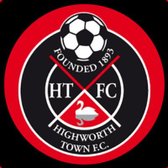 Ware fail to make the most of their opportunity as Town’s ten men hold out for a point.

This was a frustrating afternoon for the men in blue as they were unable to get the better of the home side who competed well with what looked a well-rehearsed strategy. Playing an offside trap with a high line they squeezed Ware’s passing game. So practised in it are they and confident in its success that almost every through ball raised an appeal for offside from one or other of their back four whether justified or not.

In the circumstances Ware became reliant on the dribbling skills of Theo Ofori to penetrate an obdurate defence. He can certainly dazzle at times and will claim an assist for both his side’s goals. The first came after a good move provided him with a scoring opportunity that was denied by the hand of Town’s captain Nicholas Stanley. Stanley was red carded which seemed a bit harsh but Liam Dulson was unmoved and scored from the spot for his first goal in just over a month.

Ofori also has the knack of extricating himself from trouble and coming away from what seems a hopeless situation still in control of the ball. He managed that on the by-line after 35 minutes before pulling the ball across the Highworth area for Liam Dulson to score his second.

Both goals were equalisers after the home side had scored with two thumping shots. As early as fifteen minutes into the game Highworth’s Sol Pryce had been allowed too much time and space and took advantage to hit the ball with enough power to leave Fred Burbidge standing transfixed as it sped into the net.

Fifteen minutes later the ball was lost just inside the Ware half allowing Felip Bogo Barcelos to size up the situation and drive it into the top corner of the Ware net from distance.

By this time Town were already down to ten men and without their captain they had lost a steady influence at the back. Stanley had seemed like a magnet to the ball and had stifled much of Ware’s forward movement. So, once Ware had their second equaliser victory might have seemed an inevitability.

With the second half wind at Ware’s backs play was mostly in the Town half but the home side continued to look dangerous on the break. Ware struggled to penetrate their defence and whilst Ofori continued to weave some magic there was a sense that his end result needed not always to be a shot at goal. A pass to a colleague might well have wrong footed the opponents.

Meanwhile James Walker in the home goal had been turning time wasting into an art since before the half time break. Every ball was grasped for dear life and not released for way beyond the permitted six seconds. Maybe the referee was taking note and intent on adding time at the end but there was no outward indication. As a result, frustration grew until finally Walker was on the receiving end of Renée Howe’s attention. He made enough of the bump for Howe to be cautioned.

At the very end of the game Highworth’s Pryce threw a punch at Louis Rose to earn his team’s second red card but Ware’s two-man advantage came too late to make a difference.

For Ware, Dan Rumens’ first start since October saw him the victim of a third minute tackle that earned Riegan Cooke an early yellow card. Rumens lasted another thirty minutes before being substituted with Richard Bryan who thereby signalled his return from injury as Rumens returned to the treatment table. Bryan went in to his customary left back position allowing Chris Arthur, filling in for Marcus Milner’s absence, to take over at centre back.

Ware’s first drawn game since the play-off semi final at the end of last season was one of five in Saturday’s ten Division One games, a fact which means they have not lost ground on anyone other than Berkhamsted who continued to prosper at home to Kempston Rovers.

A chance to return to winning ways comes next Saturday at home to Thame United, please note that in common with all Southern League fixtures that day, this game will kick off at 12.30.