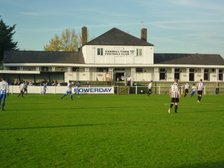 It was hard going but the win lifts Ware back into the play-offs.

By their manager's own admission Ware made hard work of this victory. Even before they had a man advantage they seemed to have the edge over their opponents but failed to make it count leading supporters to the view that a good passing game is all very well but without an end product it can seem a futile exercise.

Hanwell's Liam Hind voiced his opinions to the referee on different issues but forcefully enough to earn a straight red in the first half, his absence allowing Ware the space to spread the ball more and show off their skill and passing game as they attacked down both wings. Even so it was the home side who had the best strike of the half, a long range shot that brought a good save out of Jack Smith as he palmed it away to safety. That apart neither side really tested the two keepers.

Hanwell started the second half as though they had decided that a draw was the best they could hope for. As a result Ware held possession and pressed forward on numerous occasions until their attacks broke on a solid defence. To add to Ware's frustration Arvy Kacinkevicius in the home goal was happy to waste time, challenging Ware to make him pick up the ball and get play flowing again.

But eventually the home side came out of their shell and started to look for scoring opportunities with the result that Ware's attacks found more room again. This led to Khale DaCosta being on the end of a break from defence in the 63rd minute before he was upended as he bore down on goal. Kieran Bishop accepted the chance to boost his goals total from the penalty spot.

The game, which never rose to great heights, now did at least take on an end-to-end character as the home side sought an equaliser and the visitors a game clinching second goal. Wesley Hause might have scored it with 12 minutes to go but, under pressure and with a high bouncing ball, could only sky his effort well over the bar. Then in the final minute DaCosta fed Bishop who was only denied by a brave Kacinkevicius diving at his feet.

Luke Kanjor, who came on with 20 minutes left, did enough to suggest he is worthy of further consideration whilst Hause, making his second entry from the bench, still looks to be in need of full fitness and speed. Ben Crilley continues to impress at the back and Jack Smith should be pleased with his fourth clean sheet of the season.

That said it is hard to know what Ware's next league opponents Arlesey, whose representatives were in the crowd, will get from watching this display from a young Blues team that finds it hard to put together two consecutive performances of the same quality.

On the injury front Josh Oyibo was named as a substitute but was obviously not ready to return to the fray following his ankle injury against St Ives. It was not clear if he would be fit for Tuesday's visit to Tring in the Senior Cup.