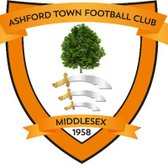 Anniversary celebrations graced by entertaining game but come on Ware, it should have been three points.

Fifty years after Ware's epic encounter with Luton Town in the FA Cup three members of that team came to watch their successors compete for league points. They saw a good contest in which Ware went behind before doing more than enough to have secured all three points. As it was yet another late goal saw the points shared.

The visitors took the initiative early on and Anthony Page was needed to bring off a good save after 12 minutes to keep the scores level. At the other end of the pitch it was clear that Ashford's strength was in a well drilled offside game that not so much caught the attackers out but kept them compressed to the area just inside the half way line. One Alaa Oujdi cross did reach Leigh Rose in this period but his shot was deflected wide.

As Ware struggled to open up the visiting defence Ashford showed how to do it after 16 minutes. Jack Beadle was free on the left and his quick fire shot could only be parried by Page into the path of Thomas Brunton who scored with ease.

Four minutes later Ware were almost level after Oujdi's corner from the right was met by Albert Adu, whose header hit the underside of the bar before being cleared. Time would show this to be a foretaste of things to come.

Jack Daveney was an unusual choice at right back but, with Charlie Yexley injured and Harry Norman suspended after being sent off in the previous week's game at Tooting, he did well. John Frendo was another unexpected starter; having completed a week's worth of hard training he lasted the course well and was soon in his stride.

As early as the half hour mark he was on the end of an Oujdi cross, heading it back across goal where Adu was running in only to be denied by a clutch of defenders. A few minutes later Dominque Njoya's cross from the left found Frendo but this time it was his turn to be surrounded by defenders who stifled his opportunity. This did however initiate a period of pressure from the home side and by the time the half time whistle was blown Ware looked to be on the right track.

They carried on into the second half and on the run of play should have put the game to bed. It looked as though they would just over ten minutes in when they scored an equaliser. A Ware attack down the left was cleared out of the ground but a quick throw in caught the Ashford defence out of position. Frendo's equally quick reaction saw what some thought was a cross cum shot. In terms of direction it was clearly a cross but the power behind was more like a shot. In the circumstances Adu's leap to meet the ball and head it into the empty net was remarkable.

Frendo was really finding his feet now and proving an asset whether in front of goal or acting as the hold-up man further out. But it was Dave Cowley who had the ball in the net after being released by Adu only to be ruled offside by the closest of margins.

Cowley turned provider with just over ten minutes of normal time left when his cross from the left found Adu. This time there was no clear space for the Ware number ten but he rose between defenders to head firmly into the centre of the net to give Ware the lead with his second goal.

That should have been it and might even have been better on 81 minutes when Adu's cross eluded the defence. Ben Hart was speeding in and maybe a split second earlier he might have diverted the ball into the net. Instead he clipped it high and wide.

Four minutes later Frendo nodded the ball on to Cowley in the Ashford area but the shot was just wide. It proved a costly miss as from the restart Ashford went to the other end of the pitch where James Cottee was on hand to drive a fierce shot past Page for an equaliser.

Ware pressed unsuccessfully for another goal with Gareth Madden's shot being cleared from the goal line. It was the third time he had suffered that fate after two earlier headers had been spooned clear, something which probably summed up Ware's afternoon.