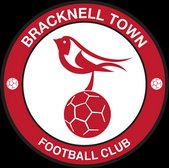 This was hardly the best afternoon for watching or playing football with persistent rain being driven down the pitch in temperatures barely above freezing. No wonder many supporters opted to stay at home in the warm or maybe go Christmas shopping leaving Ware with its lowest attendance of the season.

What the absentees missed was the Blues' first seven goal haul since a 7-0 win against Tilbury over ten years ago. Back then Tilbury were struggling but the same could not be said of promotion candidates Bracknell. To be fair the match was a lot closer than the score line suggests with the visitors having a fair share of the ball and territory for much of the game.

Yet Ware just kept popping the ball in the net at appropriate moments to keep control of the game and establish a comfortable lead by half time. First on the score sheet was Brandon Adams after three minutes. On the edge of the Bracknell area he chested down a ball from Leigh Rose and then hit a half volley over keeper Mark Scott.

Bracknell heeded the warning implicit in this goal and upped their game. With the wind at their backs they started to dominate possession and might have equalised on twelve minutes when Liam Ferdinand fired across the face of Ware's goal but with neither of two team mates able to convert.

It was only four minutes later however when they did find the net. Anthony Page's clearance was held up by the strong wind and with the Ware defence caught out the ball was headed forward to Ferdinand who gave Page little chance with his shot.

At this stage it looked as though the visitors could push on to build a lead before half time. Instead it was Ware who, after weathering a Bracknell storm in their own half, found themselves with a corner at the other end of the pitch midway to the break.

Dave Cowley's looping kick ended with the ball cleared as far as the edge of the Bracknell area where Leigh Rose composed himself to shoot low into the net. Two minutes later Adams had his second goal when he seized on a poor back pass, advanced on goal and then shot calmly home. The game had turned in the space of two minutes.

To prove it another poor back pass with five minutes to the break saw Frazer John, making his first start for Ware, rob a defender and then carry the ball into the Bracknell area before slipping it confidently past Scott for a three goal cushion.

Bracknell brought on Ashleigh Artwell for the second half and started to spread the ball to their wide players, as often as possible keeping the ball on the ground. Given that the wind was now against them it was a sensible approach and they continued to worry the home defence. They went close on the hour when Page had to make a smart save tipping the ball away for a corner and ten minutes later when Kensley Maloney clipped Page's right post.

In between those two close calls however Adams had completed his hat trick. As things continued to go Ware's way the number nine collected a pass from Dave Cowley, rounded Scott wide of the goal before scoring from what seemed an almost impossible angle.

Bracknell wouldn't lie down however and Ferdinand got his second goal when the Ware defence was caught napping for once. But in a game that was entertaining from beginning to end Cowley hit the cross bar with an 80th minute free kick, engineered an opportunity for Jordon Watson to score from point blank range and finally completed the scoring with a well taken penalty.

It would be ridiculous to say that Brandon Adams hasn't made a difference. Eight goals in his four games for the club have already made him Ware's second highest scorer but the squad as a whole is looking confident and happy at the moment. Two changes from the previous week's win seemed not to upset the rhythm of the side and, hat tricks aside, it would be hard to single out any one player for praise.