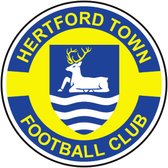 Both Blues survive a difficult hurdle.

This game was impossible to predict following Sunday's resignation of one Hertford manager and the appointment of another. Nothing more than the names of almost a completely new team to follow Adam Fisher into his post were broadcast via Twitter. Meanwhile the Hertford website remained unaccountably and frustratingly silent. There was not much for Paul Halsey to base his strategy on for the evening.

The only clear thing was that Ware faced a potential banana skin; defeat to a side harvested at short notice mostly from the youth and second strings of a number of clubs far and wide. To say the Hertford players didn't know one another might be an exaggeration but most were surely on no more than nodding terms.

Fisher's squad showed only three names that were in the Hertford line up at the weekend. However, the fear that they might coalesce into a winning combination through sheer effort, bloody mindedness or a lucky break was ever present before the kick off.

Such are the worries of fans desperate for a win in the most important league game of the season that the fear didn't altogether disappear until Ware scored their third goal with four minutes of normal time left. Brandon Adams turned his defender inside the penalty area before drilling the ball low to Charlie Mann's right and just inside the post.

With the points now as good as won it was possible to see the game in a more reflective light. Certainly Hertford had had their moments, not least in the final five minutes plus substantial added time of the first half. They forced four corners in quick succession and some wild clearances were necessary to keep the Ware goal from direct threat.

In reality though, Calum Kitscha was not required to make any significant saves until the second half when Brett O'Connor burst into the Ware area. Kitscha came out quickly to grasp the ball at the feet of the former Ware man and that was that.

Ware had started the game with their own selection problems, Gareth Madden being initially replaced by Bradley Fraser to protect Saturday's cut eyebrow. But then Ben Hart was injured in the warm up and as a result Alaa Oujdi was promoted from the bench and Madden now named in Oujdi's place though unlikely to be used.

If Ware were unsettled by these late changes it didn't show and they were a goal to the good within two minutes. A ball across the edge of the home penalty area was poorly dealt with, perhaps a sign that these new players had yet to reach a common understanding, and fell into Dave Cowley's path. He took it forward before shooting past Mann as the Ware supporters cheers from behind the goal tested to the full the reverberation effects of the covered standing.

Ware never managed to add to this goal in the first half despite some good approach work. The flowing football also started to get broken up not least when Hertford's Liam McCrohan went down in his penalty area. He was clearly in pain and was eventually stretchered off though by the end of the match he appeared to be a lot better following treatment from an ambulance crew.

Ware were beginning to find it hard to break through the home defence though they seemed to have gained a penalty when the ball went between Courtney Massey's arm and body, clearly brushing both before it was cleared. Referee Tim Donnellan was not interested however.

After their improvement before half time Hertford might have pushed on in the second period but another early goal from Cowley brought them up short. Albert Adu released the ball to the number 11 who turned his defender one way and then the other before curling a shot round Mann and into the far corner of the net.

Ware now settled back into their good approach work and there was some slick play at times with Charlie Yexley a constant threat on the right. They might have had more goals but for Mann who twice denied Cowley his hat trick whilst Adu headed over and Oujdi had a shot blocked by a defender.

Hertford were now reduced to breaks but when they did come forward this allowed the home support their turn to exploit the reverberating effects of the stand. Perhaps they could suck the ball into the net and then who knows? Instead Adams' goal sealed Ware's win.

So the Blues of both Hertford and Ware could feel reasonably happy. The home side had come through their debut without a drubbing and with something to build on whilst the visitors had not fallen flat on their faces. Ware have now extended their run of away wins to six, the last three of those each by 3-0 but face a stern test when they travel to the improving South Park on Saturday.