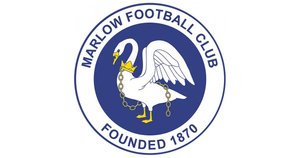 Unlike the home side who were expected to be looking to improve their place in the play-offs Ware seemingly had little to play for in this game. And that's how it looked when the team sheet revealed the absence of Leigh Rose, Jordon Watson and any recognisable right back, 16-year-old Nathan Tree making his debut in that position, the fourth member of Ware's youth set-up to get into a match day squad this season. Yet Ware stuck to their task and despite the loss of 'keeper Calum Kitscha with the score at 0-0 pulled through to a comprehensive victory.

The foul that sidelined Kitscha did result in a second yellow for Marlow's Kelvin Bossman but with no keeper on the bench and the strong wind at Marlow's back the advantage still seemed to lie with the home side. Gareth Madden went between the posts to emulate his brother who made 149 appearances in that position for Ware, surely the first time two brothers have kept goal for the club. In the event home supporters may well ask why Madden junior wasn't troubled much.

There was little sign of a goal rush in the first half. The high wind made life difficult for both sides and Ware struggled to establish a cohesive effort whilst Marlow enjoyed plenty of possession. Yet it was the visitors who had the first chance on seven minutes when Kardan Campbell sent Brandon Adams free to draw a good save out of Simon Grant.

That was the story of much of the first half; Marlow having possession to little effect but Ware exploiting the wind to break away.

Marlow might have scored on 34 minutes when Junaid Bell shot high from six yards out after Jordan Edwards' pull back but this did herald a period of pressure from the home side. Four minutes later there was what might well have been the turning point of the match when Kitscha somehow turned Adam Richards' close range header wide for a corner.

With the scores level at the restart it became a matter of how Ware would cope now that there could be no wind assisted breaks. But they kept the ball low and opened up the home defence on a couple of occasions in the opening moments.

Four minutes in however came the injury to Kitscha and the expectation that Ware would have to sit back on defence. Yet Marlow failed to make the most of facing a stand-in 'keeper and such shots as they had were high or wide.

Meanwhile Tree, who had seemed to be finding the step up to senior football demanding in the early stages of the first half was now gaining confidence. Following Kitscha's departure he was joined off the bench by James Paul, another young debutant this time from the Under-23s and he too made the most of his opportunity.

As a result Ware were pushing forward and with little more than 20 minutes remaining won a corner on their left. Tom Bruno's cross fell to Louis Rose at the far post and, under pressure he headed home for the lead.

There was still time for Marlow to pull something out of the game but, showing four changes in the starting line up from their Easter Monday win at Northwood, they just didn't seem to be firing on all cylinders. Instead Ware doubled their lead on 83 minutes when the home defence relaxed on a through ball with a Ware player in an offside position. But he wasn't interfering with play and Cowley burst through from ten yards onside, took the ball forward and slipped it under the advancing Grant.

The game was up on 89 minutes when Adu laid the ball into Adams' path. The number nine turned his defender with a deft overhead kick and pulled the ball back from the by line for Adu, who had continued his run, to score from close range.

Adams had his own reward in the fourth minute of added time to finish as Ware's highest scorer in the league when he converted Paul's cross on the line after good work by Cowley.

So a season that started with a first opening day win since 2008 ended with the best last day result since the 4-0 win at Great Wakering in 2007. Two records that bookend an excellent season and whet the appetite for 2019/20.