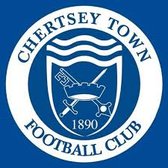 Blues stay unbeaten but it was a close run thing as Watson's late goal brings home a point.

With Jason Brown missing and Liam Hope unavailable Jordan Watson had his first start of the season and made the most of it with an 85th minute goal. He chased down a through ball and with Chertsey keeper Nick Jupp telling a defender to let it run through to him Watson got between them. More importantly he got his foot to the ball and steered it past the keeper for the equaliser.

In some respects the goal had been coming with Patrick Adamson having hit a post on the hour and Watson heading almost under Jupp's body a minute before the goal. On that occasion the keeper just managed to recover the ball as other Ware players closed in.

Ware had certainly done better in the second half than they had before the break. After an opening period when the visitors seemed to have edged things, their wide players pumping in a number of good crosses, Chertsey had slowly got their measure.

The home side were quick to close down Ware who started to lose composure as they were pressed back into their own half. Long clearances became the order of the day but they provided only brief respite as Chertsey continued to look for the opening goal though their shooting was off target.

Things came good for home side just after the half hour when Lubomir Guentchev gained possession of the ball and laid it off to Andrew Crossley. His low shot from distance bounced off the surface in front of Calum Kitscha before finding the bottom of the net, the Ware keeper beating the ground in a sign that he perhaps could have done better.

Samuel Murphy almost made it two for Chertsey with ten minutes to the break but his fierce shot from just inside the area flashed wide of Kitscha's left hand post. That was just a minute after Olu Akinsanya had been put through at the other end and was brought to the ground amid claims of a foul on the one hand and counter claims of a dive on the other. Those behind the goal seemed certain that he had been tripped but they were, of course, Ware supporters.

Akinsanya almost got compensation at the end of the half when his curling shot from the left edge of the area was heading for the top corner until Jupp made a fine finger tip save at the expense of a corner.

Ware had better control in the midfield after the break but even so it was a double substitution with 20 minutes to go, bringing on Harry Watkins for his first team debut and Tobi Adekunle, that seemed to raise their performance a notch or two. Adekunle's crosses into the Chertsey area almost paid dividends on a couple of occasions before Watson's goal.

Either side might have won it at the end and in one goal mouth scramble Gareth Madden was felled by cramp. He was eventually replaced for the final 60 seconds or so but confident that he would be available for Tuesday's FA Cup replay.

Ware's unbeaten start to the season has continued but manager Paul Halsey was not happy with the way his team had played and will be looking for better things in the cup game. Liam Hope will be available for that one but that may put pressure on Watson retaining a starting place in the team despite his goal in this game.