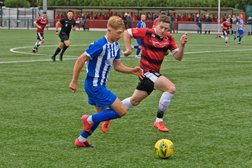 Ware battle the wind and resourceful opponents to take the three points.

This might have been the contest of two number nines except that one of them was wearing a number four shirt. That was Tommy Wade who was selected to lead Ware’s attack as two more players fell to injuries and it was the only shirt big enough for him. It was Wade’s first start in an infrequent series of ten appearances for Ware that began on September 6th 2014 away to Barkingside.

With both first choice centre backs still side lined, the report that Liam Hope and Albert Adu were also both unavailable through injury hardly improved hopes of a first league win. Ware’s line up certainly looked different and if there weren’t wholesale changes there were some interesting developments.

Three young players came in for their debuts and whilst Reece Crowter and Devonte Simms did so from the substitutes bench (and combined well in the 85th minute to leave Simms drawing a good save out of Dimitrios Kyriatzis) Finlay Titchmarsh came in from the start at the expense of George Casey. If Casey is jealous of his position he will not need reminding that Titchmarsh had a good game at right back.

Titchmarsh seemed to be growing into the game from early on as Ware started to move the ball around well and after nine minutes Tom Bruno’s free kick dropped into the Bedfont penalty area where Louis Rose turned to shoot just wide of a post. But it was the home side who drew first blood.

There was a warning on the quarter hour when they launched a dangerous run into the Ware area at which point Calum Kitscha did enough to divert the play into some momentary pin ball before the ball was cleared. A few minutes later however saw Bedfont’s number nine Darryl Sanders chasing a pass into the penalty area. Kitscha came out to meet him and dived to grab the ball.

He may have got a touch but he also took out Sanders and the referee didn’t hesitate to point to the spot. Sanders took the kick but didn’t hit it wide enough allowing Kitscha to get down and block the shot. The Ware keeper couldn’t hold it however and Sanders was quickest to the rebound and hit the ball home for the lead.

It took some time for Ware to recover from this during which Bedfont hit their cross bar as a shot was deflected for a corner. Meanwhile Wade was doing what he had been brought in to do; hold the ball and use his strength to unnerve the home defence. It paid off with five minutes of the half left when he was brought down in the home penalty area.

Tom Bruno stepped up to score the equaliser from the spot and two minutes later Ware might have been ahead as Wade’s header fed Marcus Milner on the right, his cross being met by Leigh Rose whose shot was well saved by Kyriatzis.

It was back to square one two minutes after the break as Sanders was allowed too much space and blasted the ball from distance into the net off Kitscha’s hand and the under side of the cross bar. It may have been a set back but Ware's victory was settled within another five minutes thanks to Wade.

First he again caused problems in the home defence from which the loose ball was driven home by Pat Adamson and three minutes later won a header in the penalty area. Alaa Oujdi was closing in on the dropping ball when he was floored by a defender to bring the game’s third penalty which Bruno dispatched to put Ware ahead.

Ware settled after that and as the game wore on began to look comfortable despite a late flurry from the home side as they looked to Sanders to prompt an equaliser from behind the front men. So the first three points of the season were shepherded into the club’s account from an entertaining game that was battered by a strong wind favouring neither side as it blew across the pitch. The score maintained the average of five goals each time these teams meet but the count of eight yellow cards (five for Ware) gives a false picture of a well contested match.