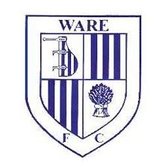 The visitors got off to the best possible start when a wide free kick was headed down by Michael Akande and prodded home by Alex Read.

Harry Larner had a couple of chances for Ware firing a free kick straight at Harlow keeper James May, before dragging a shot wide after being set by Jamie Richards.

Scott Curley could have doubled the score when he beat Jack Kelly to Leon Antoine's flick on, but he poked the ball wide. The lead was doubled when Junior Dadson, broke down the right playing a low cross in for Read to side foot home.

It was Dadson himself who added the third getting on the end of a flick on and firing low into the bottom corner of the net. Just before the break Kelly had to be on his toes to turn Antoine's shot around the post.

At the start of the second half an Elliot King forced a save from May with a shot from distance, before Jamie Smith shot wide from similar distance.

With Ware edging back into the game, Harlow extended their lead with Read getting the better of Gareth Madden and side footing home, and on triggering the offside trap he slotted home his fourth and his teams fifth goal.

Ware finished the game showing some attacking intent and it was only the reactions of May that kept them at bay, with both Richards and Ryan Fleming bringing saves from the keeper.

The best chance fell for Richards who tried to go round May and overran the ball when he seemed certain to score.