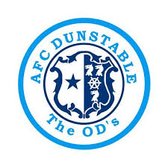 Ware get back to winning ways in hard fought match.

This was an important win for Ware, putting a stop to the post FA Cup slump that they have suffered. It wasn’t easy though with Dave Kendall marooned in Hampshire, Pat Adamson unavailable and Albert Adu still injured. It was not a good time to face a strong and competitive AFC Dunstable who were a threat to the home side throughout the ninety minutes. On the plus side Dan Rumens returned from an injury that had kept him out of the eight previous matches to make his fiftieth appearance for the club.

Hard fought it may have been but in a twist at the end Ware might have finished three goals ahead instead of one if Jamie Head hadn’t made his second point blank save two minutes into added time to thwart Liam Dulson. Then, right at the very end Bernard Christie pulled one back for the visitors. A long ball forward appeared to drop onto his outstretched arm and, receiving beneficial forward impetus, fell into his path before being buried in the net.

The referee either didn’t see the apparent handball or felt it was of no consequence. In any event it would be hard to deny Christie and his team a score line that reflected their full part in an exciting contest. And if Christie was a problem for Ware up front Ryan Frater, large and imposing but with plenty of skill as well, presented a similar difficulty at the back.

In the circumstances it was good that Ware made hay during the opening minutes of the game to take a 2-0 lead while their opponents were still getting their bearings. Taufee Skandari’s cross after four minutes fell towards Leigh Rose waiting between two defenders who gave him too much room. With time to pick his angle Rose’s header dropped wide of Head in what seemed slow motion and nestled in the net.

Five minutes later Skandari increased the lead. Tom Bruno’s free kick had caused trouble in the visiting defence and the ball was only partially cleared to the number eleven waiting just inside the penalty area. In a moment recalling his venomous shot at Colney Heath, Skandari took a couple of paces across the area before firing the ball goalwards. There was no sizzling net buster this time but a bending shot that beat Head’s finger tips before ducking below the bar.

It might have been three just short of the half hour. Bruno was having a good game and another of his free kicks dropped temptingly for Louis Rose but Head was there to make his first point blank save to deflect the ball for a corner.

That might have sealed the game for Ware but it would have been an odd situation given that the visitors looked dangerous every time they got near the home goal. Corners were especially worrying with the ODs sending their tall men forward for each one and a goal always looked possible.

It came five minutes after the half time break but not from a corner. AFC won a free kick on the left hand edge of Ware’s penalty area and in anticipation of the cross the visitors arrived in numbers in front of goal. This time they got it right and instead of it being cleared Frater had the ball in the net before the Ware defence had time to react.

There were chances at both ends as the teams sought what would surely be a significant goal. In the end it fell to Ware after Leigh Rose was pulled down in the penalty area. The initial tug on his shirt was too obvious for anyone to miss and possibly unnecessary as Rose chased a ball that looked to be going out of play.

No matter, Liam Hope stepped up and after twice calmly going back to the ball to adjust its seating on the penalty spot, thumped it high into the net. Even with Christie’s late goal that was enough to ensure Ware took the points. It certainly gave them a buffer which enabled Paul Halsey to substitute Rumens with Rechan Esprit, no doubt hoping to safeguard his centre back for the continuing series of difficult league games.