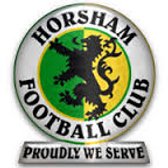 Below par performance sees Ware out of the FA Trophy.

This was not a great spectacle to be laid before the public on non-league day but Horsham won't be worried as they move on to the next round with the £3,000 prize money in their pocket. Neither side really got going with Ware caught out playing close passes that either didn't have the power to reach the intended recipient or just left him under pressure from a Horsham player.

On the other hand Horsham spread their passes wide but frequently too wide, leaving the field of play without getting a move started. When they didn't go out, especially on the right, there was a sense of danger as Will Hoare ran free but the home side failed to capitalise.

It would be wrong to place Ware's failings on any one issue. However, they were without Jason Brown who was fulfilling a family commitment in the West Indies and his ability to disrupt opposition attacks and launch Ware's own was missed.

Neither side got on well with the referee either and by the time of the second half Horsham's Harvey Sparks was loud and frequent with his complaints. Ware's Jack Daveney, no doubt with the added frustration of seeing the game slip away from his side, went too far and earned successive yellow cards and an early shower for dissent with fifteen minutes to go.

By that time the Horsham's manager Dominic Di Paola had also departed the scene after throwing a ball onto the pitch to prevent a quick throw by Ware. The punishment seemed a bit harsh but maybe something was said.

The game itself was even in the early minutes with both sides probing but with no clear cut opportunities. Ware's first chance came on eight minutes when Leigh Rose was released by a good ball from Dave Cowley, Rose turned his defender but somehow the ball wouldn't sit up for the shot. Five minutes later Cowley again played Rose in but this time Josh Pelling was out of his goal and just in time to reach the ball first.

Ware probably had the best of the chances but the game needed a goal and it came at the other end after 25 minutes. A ball in from the Horsham left found the Ware defence at sixes and sevens giving Hoare time and space to score low to Anthony Page's left.

For a time after this the home side had their tails up with Ware looking second best but ten minutes later Albert Adu's pinpoint pass put Rose one on one with Pelling. Rose's shot was parried back to Cowley who teed the ball up but drove it straight at the keeper.

Ware were looking dangerous so it was disappointing that with a minute of normal time left before the break they gave away a penalty. A ball out to Ware's left saw Billy Baird move up to catch his opponent offside but the rest of the back four were not on the same wave length. This allowed Hoare to bear down on goal where he was bundled over as he came together with a defender. Some thought the penalty harsh but not Charlie Harris who scored from the spot to give the home side a two goal margin and an uplift that saw them come close twice in added time.

The second half brought two substitutions for Ware with Dominique Njoya coming on for Baird and Harley Haag for Josh Oyibo. Ware certainly put in more of a shift and had the better of possession and territory for a long time but it appeared to be through effort rather than a fresh approach. Ben Hart and Adu both had fierce shots on target in this period but both struck defenders and were turned away.

And for all their efforts Ware were undone after 72 minutes when Horsham scored a third. The visitors, not without some reason, claimed a handball in the build up as the ball bounced up and hit a Horsham arm in the Ware area before coming out to the waiting Harris. His curving shot from distance beat Page for the best goal of the game.

It seemed all over but two minutes later Ware had pulled one back offering their travelling support some hope. Good work from Adu saw the ball fall to Njoya who scored from close range.

Any potential revival however went with Daveney's second yellow card and whilst Ware plugged away Horsham might have added to their score as Tyrell Richardson-Brown broke dangerously more than once.