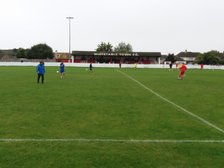 See-saw battle ends in stalemate so teams must meet at Wodson Park for a second try.

Ware will be happy enough to have come away with a draw and a home replay from an FA Trophy game that constantly swung in one direction and then the other. What Whitstable will make of the need to travel from Kent in midweek to settle this tie one can only guess.

Neither side really got the better of the other. Even in the dying minutes when the Oystermen started to pile on the pressure Ware still managed to mount attacks and in the 92nd minute Williams Danquah hit a post as Ware sought to finish off their opponents.

Ware's play was strangely disjointed for much of the game with their 3-5-2 formation severely tested especially in the first half by the home side's number 11 John Ufuah. His skill on the ball exposed the Ware defence not least just before the half hour when he turned away from Dave Kendall and shot low past Calum Kitscha to give his side the lead.

At least it didn't last long. Tom Bruno, with Ware's fifth corner of the game, floated the ball into the Whitstable area and with the home defence static Olu Akinsanya headed the equaliser.

Yet Ufuah was back causing problems on the left. With no recognisable right back one or other of the central defenders was dragged from their comfort zone and the Whitstable danger man opened up the defence for shooting chances. At the other end and with five minutes of normal time left before the break good interplay between Liam Hope and Joshua Williams saw the latter's cross just too deep for Akinsanya to get his foot to it.

But the frustration turned to smiles in the last minute as Pat Adamson, whose forward runs down the left had already resulted in several good openings for Ware, had one more run at the opposition. With Whitstable calling for an offside flag Adamson drove forward and lifted the ball over home keeper Dan Eason. It dropped into the area in front of an open goal and the in coming Akinsanya had what looked a simple task to prod it home for the lead.

It was all Ware in the period immediately after the break and on 52 minutes Liam Hope laid the ball in to the six yard box where Akinsanya was ready, or so it seemed, to complete his hat trick but somehow his shot lacked the power or direction to beat Eason.

A sign that the pendulum was swinging away from Ware came a few minutes later when Marshall Wratten just failed to get on the end of a diagonal ball through the Ware defence in front of Kitscha. Ware bounced back with Williams finding Akinsanya whose shot this time boasted both power and accuracy but was blocked by a surprised defender.

With a quarter of the game remaining Whitstable brought on Marcus Elliott and the change almost had an immediate impact with Kitscha doing well to scramble a free kick away for a corner. Ware were living dangerously as pressure from the home side began to grow. It paid off after 75 minutes when an attack was half cleared just beyond the Ware penalty area where Tijan Jadama seized on the ball to drive it low past Kitscha's dive.

At the other end as Ware fought back Bruno had a good shot parried away by Eason and just beyond Williams' reach but it was Whitstable who had their tails up. With the Ware defence caught off guard by a high ball Ufuah was again on hand but in the ensuing scramble he was kept inches away from knocking the ball into an empty goal.

As it was Danquah might have sealed the win for Ware but it would have been hard on the home side who had ended the game strongly.