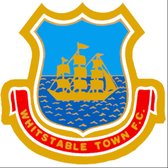 The two sides provide another cut and thrust game not settled until the very end.

It will be Ware who progress to meet Leatherhead in the next round of the FA Trophy thanks to Liam Hope's goal at the very end of extra time. In another evening of entertaining football neither side managed to produce any sustained quality but there was no shortage of action.

Doubtless with one eye on Saturday's league match at Bedfont Ware rested top scorer Olu Akinsanya who had picked up an injury in the first game. This may go some way to explaining why, against a strong defence, Blues failed to score in the ninety minutes of normal time for the first time this season.

Louis Rose, who started out as captain on Saturday, was also sitting on the bench whilst club captain Gareth Madden returned at right back and Williams Danquah was given a start. This latter change meant that Ware, with Alaa Oujdi and Pat Adamson, had three left wing backs on the field. Did they think Whitstable were weak on their right side?

There was not much to suggest that as both sides worked hard to find an opening but without success. Neither team showed any signs of weariness and went for victory from the start nor, despite the game going to extra time, was there any let up.

Surprisingly in those circumstances Whitstable made only two substitutions, the second late on in extra time and Ware made only one. Louis Rose came on for Dan Rumens who was nursing a dead leg, caution over Saturday's league game continuing to exercise Paul Halsey's thoughts.

For Ware the first opportunity came after sixteen minutes when Tom Bruno's free kick was met by Leigh Rose whose header was way off target but volleyed off for a corner. Bruno took this too and his kick caused problems for Dan Eason, the keeper dropping the ball in the six yard area and it was almost stabbed home.

Whitstable came back four minutes later when John Ufuah's ball across the penalty area was just steered away for a corner. Two minutes after that Marcus Elliott's cross was headed just over by Aaron Millbank as the visitors continued to hold sway.

But in a half that Whitstable edged Ware had the last word when Josh Williams was played in to the penalty area. However, Eason came out to block his shot which might have been better laid across to Danquah who was waiting near the penalty spot.

If Ware were generally second best before the break it was a different story in the second half. Even so after a period of home pressure a misplaced pass set Elliott away on a lone run but Calum Kitscha saved at point blank range.

It wasn't the end of Kitscha's involvement in the game but Eason became the busier of the two for much of the rest of the game. Josh Williams' cross at the other end went across the face of goal with Hope just unable to convert before, two minutes later, Pat Adamson's shot was somehow blocked.

Hope was next to be denied when his shot from close to the penalty spot was well saved. Moments later Danquah's cross eluded everyone as it seemed to run almost along the goal line. A number of other occasions found Eason punching clear under Ware pressure.

In extra time Louis Rose burst forward but, perhaps surprised at finding himself on the edge of the opposition penalty area, he pulled his shot wide when, as before, a pass to Hope might have been better.

Kitscha pulled off one more save in the second period of added time before thoughts turned to who would take Ware's penalties in the expected shoot out. But with normal time almost up those thoughts were banished when Danquah's cross from the left was met by Hope at the near post and turned into the net.

After 210 minutes of back and forth football neither side deserved to lose this tie but the rules demand a winner so we were at least spared the lottery of a penalty shoot out.