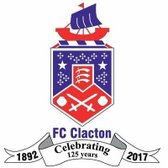 Brexit means Drexit but not Wexit.

In the town which came to symbolise the depth of support for leaving the EU, Ware kicked off with news filtering out that manager John Dreyer had tendered his resignation. How this might affect the players and, for that matter, did they even know were the questions being asked but Ware came through this FA Cup meeting comfortably enough and won't be exiting the competition yet.

Whatever was in the minds of the players both teams set off with a will. After three minutes the home side fired a free kick into the Ware six-yard box where Vlantislav Gkontsarov punched unconvincingly away under pressure before, at the other end, Albert Adu was alive to Joe Fowler being off his line and tried his luck with a long shot that was just over.

Clacton were putting a lot of effort into the early stages of the match but possession didn't lead to anything more than half chances. On the other hand Ware were opening up the home defence and after 11 minutes Alaa Oujdi crossed high into the box where Lauric Diakiesse was waiting as it was missed by a line of defenders. The number nine's shot however was over the bar.

Diakiesse made amends two minutes later as Fowler parried Jack Daveney's shot into his path and he scored from close range. But if Ware were hoping to press on from this opening there was a set back with Charlie Yexley having to be replaced by Billy Baird because of ham string trouble.

Minutes later Clacton looked as though they were about to score an equaliser as Jordan Brazitis' fierce long range shot seemed to be heading in but Gkontsarov somehow got across to tip the ball away for a corner. He was less sure just after the half hour when he misjudged a defender's attempted headed clearance, letting it go only to see it come back from the cross bar. Clacton's Jake Plane was on hand to fire it into the goal.

Ware regained the lead on 37 minutes when Adu broke up the left, seemed to have lost the ball to Zach Smith-Walter's tackle but tenaciously won it back, and crossed to Oujdi outside the Clacton area. Fowler got a hand to Oujdi's shot but couldn't stop it hitting the back of the net.

Clacton may have felt a little unlucky at the half time score line especially after a goal mouth scramble that Ware somehow managed to survive. But for all their effort the home side weren't clinical enough whilst Ware had the players to make the most of their opportunities.

The second half started in a similar vein with Jack Daveney's shot being scuffed away at one end whilst Plane's fierce drive after Ware's defence had been cut open swerved away from goal.

The breakthrough came on the hour when Oujdi, who was having perhaps his best game in midfield for the club, pulled the ball back to Adu on the edge of the area. He emphasised the difference between the two teams whilst also supporting his own claim for a man of the match award by drilling the ball low to Fowler's left and into the net.

The game was definitely up when Oujdi was again to the fore robbing Wayne Chapman of the ball before putting it across the front of the Clacton area where Dave Cowley was waiting. His low shot found the same spot in Fowler's goal as Adu had ten minutes earlier.

Ware might have made it five when Callum Taylor broke from his own half before supplying Daveney who it the ball on the run only to see it go narrowly wide. Instead it was Clacton who scored again after Dominique Njoya's tackle on Brad James was punished by a penalty duly dispatched by Matt Eve on 91 minutes.