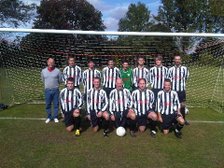 Warlingham A battler past a strong Merstham A side

Saturday 18th September – our first home game of the season was against Merstham A who are a very good side. Very young and consistently high up in the table last season. It was a great day for football, nice and bright and a nice temperature. We were in our new kit sponsored by the Clive Marshall, south London sex god, and we looked pretty dapper.

We started well, really taking the game to Merstham and not letting them settle. We kept the ball well and played some very nice quick and easy football. We had a couple of early half chances and Merstham started to get frustrated which suited us very nicely. Cocksy and Richard Wads were working well in the middle and we were competing in all areas of the pitch, as usual our defence was giving absolutely nothing away. Ben Stuart was playing in goal and was coming for the ball confidently, really commanding his area. We worked hard right the way through the first half but couldn’t get the breakthrough, Ash and Foxy had both come close but the Merstham keeper kept us out. We had a good shout for a penalty when Gavin went straight through and got clipped from behind but the ref didn’t see it our way and gave nothing. So we went in at half time at 0 0 having fought hard and at times played some excellent football.

We started the second half in the same spirit, on the attack and really pressurising Merstham. Two minutes in, the ball was crossed into the Merstham penalty area and Crunch was pulled back, not many people saw it but luckily the referee was one of them and he pointed to the spot. Jack obviously stepped forward but understandably was ushered back into the defence!! Ash took the responsibility and struck an absolute beauty which gave the keeper no chance. 1 0 and we had a fully deserved lead, we now had to have a very tight 10 minutes to consolidate. With half an hour to go I brought on Andy Wads in the centre and pushed Ollie into midfield. Merstham picked up their game but became more and more frustrated as the game went on, we continued to work hard and didn’t give them any space at all. We played the game out to full time and got a really good win, I think Merstham expected something out of the game and it was our hard work and good football that gave us a well deserved victory.

Man of the match. Lots of contenders again but I am going to give it to Ben. Stepped into goal for us at the last minute and performed really confidently.