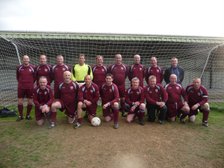 Warlingham Vets “A” vs. Battersea “A”

Warlingham came into their second Cup Final against Battersea off the back of a close and wholly undeserved defeat the previous Wednesday.

Having dominated possession for long periods without creating much we managed to beat ourselves with a “communication” issue gifting a goal and the game to Battersea 1-0 with just minutes left on the clock.

Despite our long list of achievements in the Sutton & District League this particular cup had eluded us so all the more reason to get our name on the role of honour. Manager Bradford had made a few changes to freshen things up and help deal with the long season’s fatigue. Weeks came in for his first start after too long out with injury with Paul Doc coming in at right back and Smudge switching to left back. Jez Allen started up front. The unlucky Remfry, Clements (I) and Winn joined Nichols and Payne on the bench.

Wars started the game strongly and were soon on top. Our dominance started to create the first of many chances and first Courtman with a header and then Bell again with his head went close. Shortly afterwards the same pairing missed further chances with Courtman blasting over and Bell hitting the post.

Battersea had the odd chance but rarely threatened. Jez Allen was working well up front with Benham (D) and causing problems for the lumbering Battersea defence with his fleet of foot. With 30 minutes on the clock Allen sprinted down the inside left channel and was unceremoniously upended in the penalty area. Referee Furey had no hesitation in pointing to the spot and Allen had to leave the field through injury.

Before Allen had hit the ground keeper Holtby was on his way up the field to claim the penalty and with a shorter than usual run up (only 30 yards) he blasted the ball into the bottom right hand corner and Wars were in front for half time.

The second half started as the first had left off with Wars creating chances but failing to take advantage of their dominance. Courtman hit the post again with a powerful shot and Weeks, latching on to the rebound hit his shot straight at the keeper.

Wars should by now have been 3 or 4 in front and our failure to finish the game meant Battersea could easily still get back in it and this reflected in their approach as the game drew to a close. They started to throw everything forward and for the 1st 15 minutes Wars were forced onto the back foot defending for all they were worth. During this spell Battersea hit the crossbar and Smudge managed to get in the way of a point blank shot on the line to keep us in it.

Before this there was the comic episode of keeper Holtby thinking he could dribble the ball around the Battersea forwards on his weaker side and get away with it. Not unsurprisingly he got caught in possession but somehow the Battersea forward managed to put the ball wide with the goal gapping. Whilst this was clearly not the fault of Holtby nonetheless everybody else sighed with relief.

Finally it was over and Wars had grabbed their 4th cup final win of the season from the 6 finals we managed to reach. The Vets “A” now have just one game to play – against Battersea “A” again. Anything other than a defeat will see Wars crowned League champions.

MOM: Difficult as there were many good performances. Weeks was exceptional on his first outing this season. Ashburn was coolness personified at the back and Wilson worked his socks off in midfield. For your reporter Andy Bell capped an excellent season with another great performance winning everything at the back and making a telling contribution all around. Only lacked a goal and he should have scored on at least 2 occasions.