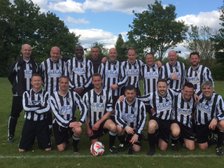 Wars met Interwood in the quarter finals of the Surrey Sunday Veterans Cup needing a show of character after a few disappointing results.

Having lost John Fowler to injury during the week, doubts over the fitness of Rob Ashburn and the absence of Mark 'smudger' Smith due to 'thumb upon head' syndrome Bobby Clements from god knows where and Steve Rodgers from the B team were called up at late notice to join the squad.

The game started at a frantic pace and was mainly confined to the area between the two penalty areas with both teams trying to establish the advantage. Interwood clearly had the greater pace but Warlingham set out their stall to be difficult to play through with five across the midfield and a deep lying back four denying space in behind.

Bar a few half chances at each end the first half passed with no score and relatively little to excite the good size crowd on such a bitterly cold afternoon.

The second half followed much the same trend as the first with Interwood enjoying long spells of possession without often penetrating the back four.

With 35 mins to go Bobby Clements replaced the Jazz man up front and the fresh (not for long) legs helped give Wars a little more width and movement when attacks could be mustered. Interwood kept up the pressure but as they pushed on trying to find a way to break through they were losing some of their shape meaning there were more gaps between their defence and midfield and when their attacks broke down the break sways were becoming more incisive but without troubling the Interwood keeper.

With fifteen minutes to go Rob Ashburn's heroic efforts came to an end with what has been confirmed as likely to be a season ending knee injury following a couple of tackles which damaged further his already injured knee. Gez Allen replaced Rob and immediately made his physical presence and pace felt up front.

The next few minutes saw Warlingham start to make more inroads into Interwood's last third with Interwood coming back every time with an attack of their own. With 7 minutes to go a clearance out of the Warlingham defence was challenged by the effervescent captain Paul Courtman and the two Interwood centre halves with neither making good contact seeing the ball fall to the feet of Gez who just inside our half laid the ball off to the tireless Ian Clements. Clemo took the ball in his stride and ran the length on the Interwood half to keep his cool and calmly slot the ball past the keeper who had to cover the potential ball inside to Courts who had somehow made another lung bursting run to keep up with play and offer the potential option.

The restart saw the expected onslaught from Interwood commence and they had a couple of chances particularly a header from a corner which went straight into grateful keeper Tony Holtby's arms. Warlingham then broke again which saw a cross from the right hand side fall to Bobby Clements who hit a fantastic volley which their keeper somehow managed to push around the post from 10 yards out. A further Warlingham corner saw Bobby find Clemo with the latter somehow hitting the corner of the post and crossbar from two yards out when it seemed impossible not to score.

A couple more Interwood attacks were repelled before the referee, who deserves a mention for his consistent and quietly managed display, blew the final whistle to see Warlingham progress to the semi final to meet Raynes Park who beat Sutton comfortably in the other quarter final in our side of the draw.

It was a fantastic display of determination and discipline by all the team and no one player deserves anymore praise than the next. It should remind everyone that we've still got both the desire and ability.

Also credit to the Interwood players and support who showed their class in defeat and a good number of whom stayed for a drink afterwards.