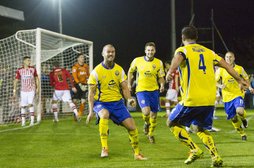 The 12/13 season saw the club go through a major transitional change on and off the field as the club went through some 62 players, off the grass Managing Director Toby Macormac brought some new sponsors on board who bought into the potential the club was showing in a town deserving of league football. However the season petered out to an 11th place finish but showed real signs of change towards the end as Reid looked to have brought in some quality.

Those changes rang further true when Macormac stepped up to take over as Chairman for the 13/14 season and although we lost the first two matches the team went on a 19 match unbeaten run and remained at the summit for 17 matches. It was many seasons past when the crowds has something to shout about as the club reached the playoffs for the first time in its history and broke some long standing records. Unfortunately we lost the playoff semi-final to Bamber Bridge but at last has plenty to be proud off.

In a deja-vu type scenario the team lost the exact same two opening fixtures of the 14/15 season to the same two teams as last season! but what followed no one could ever have imagined.It started with a 7-1 Prelim Round win over Barton Town Old Boys followed by