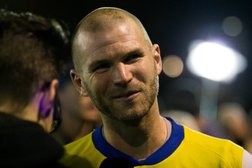 Forever part of the club's history after scoring the goal which knocked full-time professionals Exeter City out of the F.A Cup in front of the Match of the Day cameras live on TV at a packed Cantilever Park, Robinson completes the new management set up alongside new manager Paul Carden and First Team Coach Mark Beesley.

Robbo left Warrington to continue his playing career at near neighbours Trafford but will now be hanging up his boots.

Club Chairman Toby Macormac said: "Craig is the final piece of the jigsaw with our staff changes and one which will add further leadership and knowledge at our level of the game.

"With all the management team now in place we can now push forward and make any necessary changes to the line up to take us forward and hopefully make up some ground to achieve a play-off position come April.

"There is still a lot of football to be played this season."

Meanwhile Warrington's proposed home league game against Blyth Spartans has been postponed, due to their FA Trophy replay.

Town are back in action away at Stafford Rangers next Saturday, kick off 3pm.