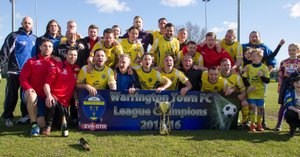 WARRINGTON Town have made two further additions to their squad in preparation for the forthcoming season in the Evo-Stik Premier Division.

Young energetic midfielder Scott Harries, who is still in his early 20s and figured in the Evo-Stik Division One North Team of the Year for Clitheroe last season and the experienced ex-Liverpool and Swindon central defender Andrew Nicholas have both signed for the Yellows.

Harries has also gained experience at AFC Fylde, Ashton United and Northwich Vics and can play anywhere across the middle of the park.

Nicholas aged 32 was at Marine last season after starting his career at Liverpool, where he was timed as being faster than England international Michael Owen.

After being released in the summer of 2003 he was swiftly snapped up by Swindon Town manager Andy King where he had a five-year career scoring 6 goals from 141 games in all competitions.

He also had spells at Rotherham, Mansfield and Barrow, followed by Vauxhall Motors before joining Marine.

Chairman Toby Macormac said: "I would like to thank Ally, Warren, Joe and Mike for their time at Warrington Town and wish them all the best for the future.

"At the same time I would like to welcome Scott and Andrew to the club and believe they will be great additions to a squad we are assembling with the ambition of continuing to move the club forward.