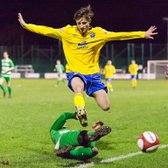 AN extra time goal from Joe Holt booked Warrington Town a trip to National League side Chester in the next round of the Cheshire Senior Cup.

A well struck left-foot volley from the free-scoring winger, who scored twice at New Mills on Saturday, eventually settled the tie in the second extra period against Northwich Manchester Villa.

The North West Counties Division 1 team had frustrated a youthful Warrington side led by experienced skipper Craig Robinson, and held them goalless for more than 100 minutes on a windy and rainy night at Cantilever Park.

Eleven of the Yellows’ match day squad are Warrington-based, though it was a frustrating evening for young striker Dylan Glass who barely lasted five minutes before injury forced him off the field.

Strike partner Rhys Bowers then hit the woodwork with the best chance of the early exchanges.

Villa’s best chance of the match came on 25 minutes, when winger Callum McGlynn sprung the offside trap, opened his body up and curled his shot wide of Karl Wills’ far post.

Substitute Ben Collins got away on the half hour and was denied at the near post, while Bowers should have done better when he raced on to Robinson’s superb through ball and had his shot smothered by the goalkeeper.

Robinson’s glancing header then fell wide of the far post and right back Greg Power saw a shot well saved by Daniel Whiting.

An uneventful opening 20 minutes to the second half finally came to an end when Chris Bandell drilled a shot wide from Phil Dean’s cross.

At the other end, former Town striker Gavin Salmon capitalised on a slip by Robinson to cut in on goal, but was denied at the near post by Wills.

As extra time beckoned, Dean’s deflected shot was fired in to the side netting by Holt from a tight angle, and in injury time Dean’s free-kick was tipped over the bar.

Town were the only likely winners in extra time, and it was Holt who looked the most dangerous.

His looping header landed on top of the goal and then a good turn created some space in the box, only for him to fire wide of the far post.

Eventually the goal did come, Jack Richards ball over the top catching the goalkeeper uncertain on the edge of his box under pressure from Bandell, and as the ball came loose Holt finished it well in to the empty net, despite the presence of two defenders.

Warrington will now travel to Chester in the next round, more than five years on from when the reformed Chester played their first ever game against the Yellows in August 2010.