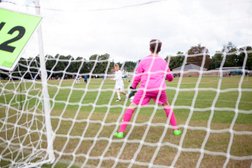 WARRINGTON Town handed a first away defeat of the season to Spennymoor Town in a promotion six-pointer at Cantilever Park.

Spennymoor ended the game with nine men having had two men sent off in the second half as things turned ugly, enabling Warrington to close out the game and record their sixth successive league win without conceding a goal.

Having been knocked out of the FA Trophy and Doodson Sport Cup in the space of four days last week, it was a welcome return to league action for Shaun Reid’s side, who handed a debut to goalkeeper Louis Gray in place of the absent Karl Wills.

The blustery wind was always going to prove a factor and Spennymoor set out to make the most of having it behind them in the first half.

A dangerous cross from Andrew Stephenson, a constant menace when the two sides last met back in April, should have resulted in more for the visitors as they enjoyed the better of the early exchanges.

Danny Frost had the ball in the back of the net on 16 minutes, but he had drifted just offside to collect Liam Henderson's pass.

A breakdown in communication between Everton academy keeper Gray and Town centre half Daniel O’Donnell was nearly punished half way through the first half, Stephenson striking wide of the far post after the pair had left it for each other.

It was after the half hour mark until Town registered their first shot, Ben Deegan flicking on Scott Metcalfe’s throw for Chris Gahgan, who fired over on the turn.

The wind then caused indecision in the Town defence and Danny Ventre did just enough to put Stephenson off as he shot wide.

A well struck rising shot by Shane Henry was tipped over the bar by Gray, who also had to be on his toes to claim a few crosses late in the first half.

Warrington will have been the happier of the two sides at the break, and they hit the front seven minutes in to the second half.

Alex McQuade’s high ball forward was brought down by a Spennymoor defender in to the path of Gahgan, who didn’t need a second invitation on goal and he poked the ball home through the keeper.

The game opened up and captain Ciaran Kilheeney had a golden opportunity to double the home side’s lead, standing up his man before firing tamely in to the hands of the goalkeeper.

Then it turned ugly. Spennymoor centre half Joseph Tate, constantly in the referee’s ear in the first half, picked up two yellow cards in the space of seven minutes - the first for a tackle from behind on Deegan on half way and the second for dissent.

Spennymoor’s hopes of fighting back were dealt a second blow 20 minutes from time, when Louis Hawkins was given a straight red card for an apparent headbutt on opposite number Scott Metcalfe.

The numerical disadvantage didn’t deter the north east side from giving it a good go in the final quarter, with tricky substitute Gavin Cogdon a constant menace in the final stages.

His shot was beaten away by Gray, who also made a decisive intervention from a Scott Kerr free kick.

The most important save came in the fifth minute of added on time, Gray beating away Henry's shot and Town clearing the resulting corner to ensure Spennymoor suffered their first away defeat of the season.

Warrington have now won 14 of their last 15 league games and travel to Prescot Cables for their next game on Saturday.