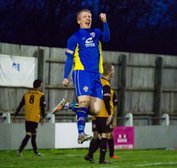 Another five star show from Town

BASEMENT boys New Mills were the latest victims of a rampant Warrington Town as the league leaders made it 12 games unbeaten with a 5-0 win.

BASEMENT boys New Mills were the latest victims of a rampant Warrington Town as the league leaders made it 12 games unbeaten with a 5-0 win.

It wasn’t all plain sailing for Shaun Reid’s side though, with all five goals coming in the second half to take their tally to 20 goals in five games in 2016 against a team yet to earn a point this season.

New signing Joe Holt celebrated his first start with a brace, while the league’s leading scorer Ciaran Kilheeney scored for his eighth consecutive game to take his total to 23 for the campaign.

The infamous sloping pitch at New Mills had taken a beating in the weather, and there were large marks on the pitch where a new draining system had been installed.

Going was tough, and playing football on the floor was difficult, especially for the visitors who played the first half up the hill.

They perhaps should have took the lead on 12 minutes with the first real chance of the game, centre half Daniel O’Donnell picking out Chris Gahgan on the right, and the tricky winger cut inside to fashion an opening, firing his left-foot shot just over the bar.

Scott Metcalfe, playing at left back in place of Alex McQuade, then lobbed the ball in to the feet of Ben Deegan who set it up for Danny Ventre to fire another shot over the crossbar.

Very little was happening at the other end, bar a couple of routine claims for Karl Wills in the Town goal, and the half ended with neither keeper having been forced to make a testing save.

Metcalfe’s cross-field ball was hit across goal by Gahgan to no avail, while a nice interchange between Darrhyl Mason and Daniel Douglas-Pringle ended in a comfortable catch for Wills.

The only other incident of note saw Nathan Burke pick up a yellow card for a fierce tackle which saw a number of New Mills defenders threaten to throw their toys out of the pram.

New Mills will have been happy with their first half display against the league leaders, the 64 point gap between the two before kick-off didn’t seem to rattle the hosts.

Nor did the goalless first half rattle a lacklustre Town, and just as they did on Monday at Brighouse, Reid’s side took the lead within five minutes of the restart.

Holt, preferred in the starting line-up ahead of Phil Dean in the number 11 shirt, capitalised on some hesitant defending to break the deadlock on 50 minutes.

It was through Holt down the right hand side, following the introduction of Dean for Gahgan on 54 minutes, that Warrington were having most of their luck.

A dummy from former Cammell Laird man Holt saw him dribble the ball inside his man and he went down in the box under a soft challenge, but the referee waved away the appeals.

Just like on Monday, this game was a real test of Warrington’s character and bottle for what is sure to be an intense title race with Northwich, themselves 3-0 winners at Ossett Albion today, and the decisive second goal came shortly after the hour.

Deegan, who had struggled to make an impact in the first half, got in behind the defensive line and his fierce shot was too hot to handle for Oliver Martin and the ball trickled in.

Town cut loose in the final quarter. First a loose ball fell to Holt from a corner, and he fired home for 3-0, and then a ball down the left released Kilheeney, and he carried the ball forward before sliding past the onrushing keeper.

They then made it three goals in seven minutes when Deegan worked the ball across the goal to Kilheeney to side foot home from the left hand side.

The win preserves Warrington’s nine point lead at the top of the table, with Northwich due to play one of their games in hand at Bamber Bridge on Tuesday.