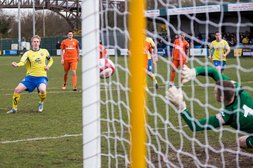 WARRINGTON Town got back on the promotion train with a 4-2 victory over local rivals Witton Albion, as rivals Spennymoor and Northwich dropped points.

The win saw Warrington open up a 12 point gap at the top of the table, as Spennymoor were held 2-2 at home to Scarborough, who equalised with a last minute penalty, while Vics were beaten 2-1 by nine man Trafford!

Warrington, looking to bounce back from their 2-1 defeat at Lancaster on Saturday didn’t get off to the best of starts with Witton taking the lead on 17 minutes when Alex Titchiner pulling the ball back to Rob Hopley who fired home from the edge of the box.

Witton’s keeper Dan Roberts had to be at his best to deny Ciaran Kilheeney on 21 minutes, but three minutes later Warrington were back on level terms from the penalty spot after Gerard Kinsella was brought down inside the box. Up stepped Kilheeney who rifled the ball home, despite the best efforts of Roberts who got his hand to the ball.

Just before the break Witton saw an effort hit the post.

There was a frantic start to the second half as an early chance for Warrington saw a Scott Metcalfe free kick punched clear by the keeper just before Ben Deegan could get his head to the ball.

Then on 47 minutes Warrington took the lead as a Joe Holt high ball into the box was headed down by the impressive Deegan allowing Kilheeney to control the ball and volley it sweetly into the back of the net.

But within a minute the visitors were back on level terms when Michael Wilson fired home at the near post after Warrington failed to clear a corner..

Back came Warrington on 52 minutes when Daniel O’Donnell head home from a corner to make it 3-2 and then two minutes later Jay McCarten scored directly from a free-kick, bending the ball around the wall, with the help of Kilheeney who opened up the gap, making it 4-2.

With half an hour still to play chances were few and far between as Warrington sent the majority of the 452 crowd home happy.

One of the biggest cheers of the afternoon came from the Warrington dressing room as they heard about Scarborough’s late equaliser at Spennymoor.

Warrington now only require two wins and a draw from their remaining five games to be crowned champions, if their rivals win ALL their remaining six games, with Northwich and Spennymoor still to play each other.