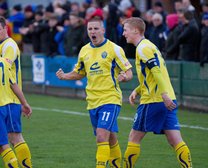 Town are just one point off lifting the league title after a hard earned 0-1 victory away at third placed Glossop North End.

Town could actually lift the trophy on Tuesday evening without kicking a ball, if second placed Spennymoor, who won 1-0 at home to Bamber Bridge, fail to pick up maximum points at Mossley.

Failing that they just need to pick up a point at home against Prescott Cables next Saturday to lift the Evo-Stik Division One North title.

After a goalless first half it was captain fantastic Ciaran "Killer" Kilheeney who scored the crucial goal, after former keeper Andy Roberston fumbled a long range effort from Scott Metcalfe, allowing the club's leading marksman to bury the ball in the back of the net.

Chances were few and far between in the remaining half hour as Warrington saw out the game for a victory which leaves them one point from being crowned champions next Saturday.

Tickets for next Saturday will be on sale at the club this Monday from 8am-8pm for what will hopefully be a promotion party. More than 6oo of the 2000 allocation have already been sold.