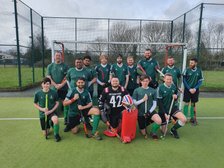 1st team started well at home against Stafford 2 with the first goal coming in on 17 minutes from Marcus Bourne who hit an absolute screamer right across goal almost taking the backboards out.

Wednesbury had hit hard from the start and had Staffs in the palm of their hands. Staffs did not come out expecting this type of play from Wednesbury and the goal was an eye opener and a kick up the backside as they came back to even the scores at 1 v 1 on 22 mins from some sloppy defensive play on Wednesbury's left flank.

Wednesbury however pushed straight back and a penalty corner on the half time whistle saw Wednesbury take the lead 2 v 1 before the break thanks to Ryan Fellows.

Unfortunately after the half time re-start Staffs picked up 2 more goals in space of 5 or 6 minutes to take a 2 v 3 lead and although Wednesbury pressed hard they just could not find the goal. Again, one of the two goals scored was at the same post as goal number one, almost identical. Unlucky as it was, they played well and there is definitely a different air about them. It will come good.