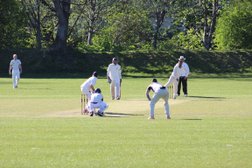 Renfrew Give Weirs a Painful Weekend

Renfrew inflicted 3 defeats out of 3 on Weirs to ensure a disappointing weekend at Albert Park.

The positive was that there was cricket played as some poor weather had made that doubtful. Although the starts were delayed both Saturday matches went ahead with Weirs playing Renfrew at Albert Park and Albert Park going to King George V fields for the 2nd XI game.

Renfrew's veteran bowler Imran Adrees was the match winner at Albert Park, tearing through the Weirs batting line-up with 8 for 6. Only Roman Butt with 36 was able to offer any real resistance with 36 as Weirs were skittled out for 63. Renfrew reached the target of 64 comfortably for the loss of just 3 wickets.

Albert Park fared better with the bat in the 2nd XI game, Zahid Hussain scoring 55 and Sheri Afzal making 39 as Albert Park reached a very respectable 194 off a reduced allocation of 40 overs. But Dean Park made light work of the imposing looking target, racing to 195 for 5 with over 7 overs to spare.

To compound Weirs' misery, Renfrew made it 3 out of 3 for the weekend by winning the Sunday League game between the clubs by 3 wickets.

The good news for Weirs is at least they don't have to play Renfrew next week!