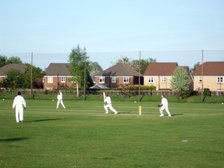 Weirs exited the Scottish Cup at the weekend but there was another win for the 1st XI on Saturday.

Weirs travelled to Helensburgh on Saturday for a game in the First Division of the WDCU. The home team batted first but were bundled out for just 38, Faiz Shah taking 5 wickets and Ali Akbar 3. Weirs knocked off the 39 to win for the loss of just one wicket. The win takes Weirs up to second in the league table.

The 2nd XI went down to defeat at home to Victoria on Saturday. Victoria batted first and made 210 all out, generously subsidized by 53 extras (including 46 wides). In reply Albert Park collapsed to 72 for 7 and although the tail wagged, mainly thanks to Farhan and Raja Safder they could only make it to 144.

The big game of the weekend was the 2nd round of the Scottish Cup against West of Scotland on Sunday. West, who are third in the Premier Division unfortunately proved too strong for Weirs. Although Weirs made a good start with an opening stand of 46 between Sameer Zia and Mohammed Kamran, a terrible collapse followed. Ten wickets fell for 57 with Weirs all out for 103. West of Scotland reached the victory target for the loss of just one wicket.