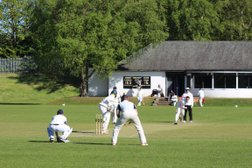 Both Weirs XIs won again on Saturday to continue their good form.

In the 1st XI game Weirs looked to put two disappointing midweek defeats against Poloc in the McCulloch Cup and Rowan Cup behind them as they faced Irvine at Albert Park. The visitors batted first and initially made decent progress, moving to 41 for 1. But a spectacular collapse followed with 7 wickets falling for just 29 runs. Azeem Akbar took 3 wickets for Weirs and Farhan Shah took 2. From 70 for 8 Irvine's tail wagged a bit to take them to 97 but it was a fine effort in the field for Weirs.

Weirs made light work of the 98 victory target. Openers Roman Butt (57) and Sameer Zia (34) took advantage of any wayward deliveries to post an opening stand of 90 and bring victory in sight. Weirs got a little sloppy at the end, losing 3 quick wickets but still got to the victory target comfortably. Weirs finished on 101 for 3, for a 7 wicket victory.

Albert Park made the longest trip of the season to Galloway. Two late call-offs left Albert Park understrength so the Weirs 2nd string might have been forgiven for having some trepidation about playing a team who beat them handily in 2018. Galloway batted first but were restricted to a modest 157, despite a fine 98 from Pat Druce. Sherali Afzal and Umar Hameed both took 3 wickets for Albert Park.

The run chase was nervous but Umar Hameed held things together with a fine innings of 64. Wickets fall at regular intervals but Rehan Choudhry and Ali Raza finally got Albert Park over the line to the victory target with 6 wickets down. It was an excellent away win in very difficult circumstances and keeps Albert Park in contention for the second division title.