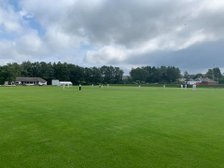 Weirs Beat the MCC in a Thriller

The Centenary game against MCC survived the weather and ended in a very tight finish.

On Sunday morning grey skies, persistent drizzle and an indifferent weather forecast left us wondering whether the Centenary game against MCC would go ahead at all. But it ended up being a great day all round for the club.

Once the rain had eased off the game eventually started an hour late at 1.30. Weirs skipper Zulfi Shahid won the toss and unsurprisingly put MCC into bat.

MCC had brought a strong-looking team with them but a devastating spell of opening bowling from Azeem Akbar and Irfan Shah soon left their innings in tatters at 20 for 7. Bowling with pace as well as excellent line and length and a bit of movement Azeem in particular sent the stumps flying again and again in the opening overs.

The MCC tail wagged quite strongly though. Bradburn made 15 and Tahir 19 to take the score up to 54 for 9. And then a defiant 10th wicket stand of 29 took the final total up to 83. Bryce Allchin batting at number 10 top scored with 32. Akbar finished on 5 for 27 and Shah on 3 for 19. There was also a wicket a-piece for returning veteran Richard "Siggy" Young and guest player Majid Haq.

Chasing 84 to win, Weirs lost Sameer Zia early but Ibrar Akram who opened with him played some fine shots, including a magnificent six over mid wicket. Together with Mohammed Kamran, Ibrar put on 32 for second wicket and when Weirs were sitting on 49 for 1 and then 62 for 2, victory appeared a formality.

But it wouldn't have been Weirs unless there had been some drama and fall of the 3rd wicket was the queue for a dramatic collapse which saw Weirs lose 6 wickets for just 13 runs. Hamza Tahir and Neil Alexander each took 3 wickets for MCC as Weirs subsided. There's no better man for a crisis than Russell Murray though. As the Yorkshireman walked the middle Weirs were 74 for 8, still needing 10 more to win. But together with Irfan Shah he steadied the ship and then hit a lovely four through the covers to seal the victory.

By this time the grey skies had disappeared and Albert Park was bathed in sunshine. A good crowd of spectators was on hand to enjoy the sun, the close finish and the contents of the curry tent! It ended up being a great day for the club and a fitting centerpiece for the Centenary celebrations.