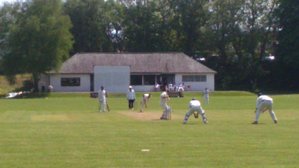 Weirs ended the season with a 2 run win over Helensburgh in a very low scoring game.

Weirs' last league game of the season was against Helensburgh at Albert Park. Inserted, on a very sticky wicket Weirs were soon in all sorts of trouble at 16 for 6. They rallied slightly to 49 all out but, even considering the difficult conditions, it was a disappointing batting effort. Shahid Hanif was the only Weirs batsman to make double figures with 16.

Helensburgh were soon struggling in response and like Weirs found themselves 16 for 6. Helensburgh's overseas amateur, van Rooyen made the highest individual score of the day with 21 but when he was out with the score on 37, Weirs had a chance of victory, needing 3 more wickets. The eighth wicket fell immediately, but a tense run chase (or perhaps crawl) followed. The ninth wicket went down on 47, Brendon Hillyard taking a juggling catch in the deep and shortly afterwards Suji Ashraf playing his first game for Weirs for several years took a slip catch to seal a 2 run win.

And the 2nd XI game against Victoria was cancelled because of a concert at Bellahouston Park.

On Sunday the rain came down, washing out the last Sunday League game of the season against Poloc and the charity T20 Tournament that was due at Albert Park.

The season isn't quite over yet though. The Under 11s and Under 12s both still have important games to play with chances of winning a trophy at stake.