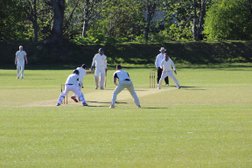 Weirs Stay on Course for Promotion

Weirs won a close game at Irvine to remain on course for Promotion to the Premier Division.

At Irvine, the home team batted first but struggled to make headway. Only Harwood with 41 could really get in. Farhan Shah took 3 wickets for Weirs and Mo Ali and Azeem Akbar both took 2 as Irvine were bowled out for just 92.

Despite the loss of an early wicket Weirs started confidently in reply; Rouman Butt and Mohammed Kamran putting on a good partnership for the 2nd wicket. Although there was a bit of a wobble as the victory target got closer Weirs eventually reached 93 for the loss of 6 wickets.

Weirs' last two games are both at home against Helensburgh and St Michaels. Unless they lose them both they seem almost certain to get promotion to the Premier League for the first time in their history.

The Second Team game against Galloway was cancelled due to rain. The Second XI finish their season against Victoria next Saturday.

We will certainly be hoping for good weather heading into this week as does this weekend not only see the last full week of league action there is also the Bill Greenwood Six a Sides to look forward to on Sunday.