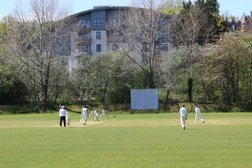 Both Weirs Saturday teams stay in with a good chance of promotion after two more fine victories on Saturday.

Weirs faced Ayr in the 1st XI game at Albert Park. The visitors batted first and after losing a couple of early wickets put on a good stand for third wicket to move for 129 for 2. But after the loss of a third wicket the Ayr innings rather fell away and they finished on 196 for 9. Ghulam Raja and Sameer Zia both took 2 wickets for Weirs. Remarkably the last 3 wickets to fall were all run outs. Interesting fact: that once happened in an innings of an Ashes Test!

Weirs started off confidently in pursuit of the target of 197; Sameer Zia and Ghulam Raja putting on 56 for the 1st wicket. Although wickets started to fall Sameer held firm and it never looked in danger of becoming a collapse. Sameer eventually had to retire hurt on 68 but Irfan Shah and returning prodigal son Suji Ashraf held firm with a good partnership for the 5th wicket. Weirs eventually won by 6 wickets to record the club's first ever Saturday league victory over Ayr 1st XI and very much keep themselves in contention for promotion.

The 2nd XI game against Williamfield in Stirling was a thriller. Albert Park batted first and made a good total of 216 off their 50 overs. Skipper Sher Ali Afzal led the way with 85 not out. Umar Hameed and Chris Smith also weighed in with 46 and 23 respectively. Williamfield chased hard for the victory target and came agonizingly close. A run out on the last ball of the 50th over saw them fall two runs short. Raja Safder took 4 wickets for Albert Park.