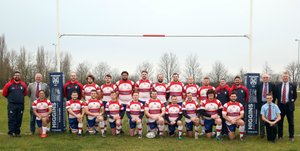 This week Wellingborough welcomed Melton Mowbray to Cut Throat Lane in a must win game for both sides. Boro were looking to get their league campaign back on track whilst Melton Mowbray were looking for their first win. Again another week and yet more changes, some of which were very last minute, in the pack there was a change at prop with Ewan Pattison starting at prop and Ryan McGealy making his debut in the second row. The backs were much changed from the previous week with Pete Vickers coming in at fly half and Steven Gall in the outside centre spot. The wings were changed with last weeks 10 Andy Seaton starting in one of the spots and Jonny Gill making his debut on the other wing. The bench again showed three changes with James Barlow, Connor Riley and Billy Hyman making his debut all making up the three substitute spots.

1st Half
The first half started with an early turnover from Pete Vickers which resulted in an early attack but the chance to open the score was missed. It wasn't long before another attack from Boro saw a penalty put into the corner, however, rather than put together some structure in the attack there was an element of panic which meant that another chance to open the score went begging. Boro were definitely on top in the opening exchanges but it just needed that final pass to hit hands or for that final decision to be the correct one. Inevitably, not taking these early chances meant that Melton Mowbray managed to get some possession and it took some a covering Pete Vickers to stop a half break from Melton, this was followed by a good clearance from Harry Bryan to get Boro clear of their lines.

An error with the ball saw Melton let off the hook again and this time they punished Boro, their initial attack was held up over the line but it wasn't long before a try came they way as they went wide to score (Boro 0v5 MM). Boro answered back, some good work from the kick off and at the scrum saw Boro awarded with a penalty which Pete Vickers slotted between the uprights (Boro 3v5 MM). Boro were finding the game a struggle with errors causing any momentum to be lost, but a strong defence meant that Melton couldn't take advantage. Finally with half time not far away Boro put together some good phases of play, a break from Pete Vickers was followed up by a strong carry from Matt Ellson. The ball was passed wide to Steven Gall who fed the ball on to Chris Shipman who in turn fed prop Ben Morton-Bright out wide on the wing, he sucked in two defenders before offloading to Chris Shipman on his outside for a score in the corner which was converted (Boro 10v5 MM). However, there was enough time for Melton to score a penalty straight from the kick off after some good pressure (Boro 10v8 MM).

2nd Half
Melton started the half going down the hill with the wind and the half started off in a scrappy manner with both sides knocking the ball on and giving away penalties. Melton started to press home their advantage as Boro struggled to get out of their half, one sustained period of pressure ended with Melton being given a penalty try and Ben Morton-Bright being sent to the sin bin (Boro 10v15 MM). Some good work at the next kick off from Billy Hyman saw a penalty shot awarded to Boro which Pete Vickers scored to bring Boro closer to Melton (Boro 13v15 MM). The wind was proving a hindrance to Boro as Melton's kicking game kept Boro pinned back, however, some strong defensive pressure saw a Melton mistake and Steven Gall kicked through and took Boro into the Melton 22, one more kick took the ball up to the try line but unfortunately the ball couldn't be gathered and the chance went.

Melton soon put Boro under pressure and this time it took some good defensive work from full back Kieran Fereday to stop a try. Errors from Boro kept letting Melton into the Boro 22 and it took some good defensive work at the breakdown to stop another score. Some further pressure from Alex Bean saw Melton put under pressure and eventually a penalty was awarded to Boro which Pete Vickers kicked (Boro 16v15 MM). The game was now end to end and it took a good tackle from Jonny Gill to prevent a Melton try. Both sides were now trying to ensure they won and frustration briefly boiled over which resulted in a Melton player and Matt Ellson being sent to the bin to cool their heels. Melton started to turn the screw and were held up over the Boro line, a series of scrums from Melton were held at bay by a strong Boro scrum but Melton with a free play scored a drop goal to take the lead (Boro 16v18 MM). From the kick off Billy Hyman proved a nuisance winning the ball and a Melton player infringed giving Boro the penalty with a minute to go, the posts were pointed at and against the wind from 40 yards out the ball was smashed between the uprights by Pete Vickers to give Boro a late lead (Boro 19v18 MM). There was still time for the kick off and the ball was eventually cleared off the park to give Boro the win.

Well it was a win and without doubt a game that we would have lost last season. However, it was a scrappy performance which was inevitable with the 9 changes to the 18, I reckon that's about 6 players who have made their first team debut this year which I guess shows a good level of depth but the flip side of this is the ability to maintain any structure throughout the game. Next week sees a Friday night game against local rivals Old Scouts, both teams need a win and therefore we need as much support as we can get so come over and support us at this away game.

Finally, a big thanks must go to the 'A' team who unfortunately where plundered by the 1st XV on Sat due to a couple of last minute changes and they still managed to win convincingly. It was also good to see three senior mens teams at home on Sat lets ensure that we can keep this up and hopefully we can manage to get a fourth one out at some point................