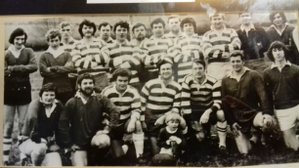 Another look back in to the club archives - this from fifty years ago.

Saturday, September 19th, 1970
LOSS OF GROUND COULD CAUSE PROBLEMS FOR WELSHPOOL RUGBY CLUB
With the opening of their clubhouse as a joint venture with Victoria Bowling Club in the offing, Welshpool Rugby Club have hit some new snags at the beginning of the season. They are without a ground for their home matches and with all games being played away, it could mean financial disaster as far as the social side of the new clubhouse is concerned, says secretary Mr Graham Biggs.

The club are unable to use their previous pitch at Feggy Leasowe because it is in such a state after the County Show that it has got to be re-seeded, it was allegedly reported that the main damage was caused by the motor cycle racing after the show. The Club’s first home match was due to be played today against Rolls Royce of Shrewsbury but the venue has had to be reversed.

Saturday, October 31st, 1970
FARMER HELPS WELSHPOOL RUGBY CLUB TO FIND A NEW HOME
A local farmer has come to the aid of Welshpool Rugby Club by allowing them to use part of his land to fulfil their home fixtures. Mr Cyril Alderson, of Lower Leighton Farm, agreed that the club could have a pitch on the same field as that used by Welshpool Amateurs.
Mr Graham Biggs said: “After the loss of our pitch at Feggy Leasowe we had several offers but the fields were either not quite big enough or overhead cables were in the way. Mr Alderson came up trumps and this week we have been preparing the playing area for our first home on Saturday.

We are most grateful to Mr Alderson and to others who made offers but which for one reason or another we were unable to accept.” The Club is also hoping to open its new clubhouse, which is a joint venture between the Rugby Club and the Bowling Club on Saturday next, November 7th, 1970.