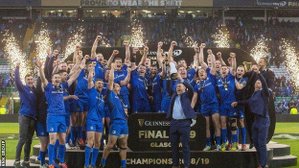 Pro14 to return in August with derbies

Defending champions Leinster were unbeaten when the season was halted

The Pro14 will return from a five-month Covid-19 pandemic hiatus with derbies from 22 August.

Teams from the same nation play against each other home and away before the season is concluded via semi-finals and a final.

Those finishing in the top two places in Conference A and B will contest the semi-finals.
That final is scheduled to take place on Saturday, 12 September with the venue to be confirmed.

The remaining eight rounds of fixtures scheduled will not be completed, meaning the regular season will be cut from 21 games to 15.

Four consecutive weekends from the restart date have been earmarked to conclude the campaign.

Defending champions Leinster and Edinburgh lead Conference A and B respectively.
European qualification will be based on finishing positions after round 13, which has already been finalised along with the unplayed games deemed draws.

European Professional Club Rugby (EPCR) is considering increasing the number of teams in next season's Champions Cup from 20 to 24, a change which "would apply to next season's tournament only on an exceptional basis".

That would increase the Pro14's representation in Europe's top-tier competition from seven to eight, with Welsh region Dragons claiming the additional qualifying spot.

EPCR will meet on Wednesday, 24 June to discuss the matter and how its competitions may be affected by the ongoing effort to realign rugby's global calendar.

In a statement, Pro14 organisers said: "The 2019-20 season will have an abbreviated finish that features the most attractive match-ups and rivalries from the Guinness Pro14 with two rounds of derby games in each territory counting towards final positions.

"Games postponed prior to the indefinite suspension will be deemed 0-0 draws as previously stated by Pro14 Rugby on 28 February, 2020."

Rugby nations Ireland, Wales, Scotland, Italy and South Africa have teams in the Pro14, covering six governmental jurisdictions whose health guidance in the face of Covid-19 must be observed.

It is, therefore, still to be confirmed whether fans will be allowed into matches.

Tournament director David Jordan said: "Safety has been, and will continue to be, the highest priority.

"We are very fortunate to be in a position where everyone involved is confident that we can conclude the season on the field of play.

"The work and diligence of our leading medical personnel at our unions, our clubs, World Rugby and key stakeholders to get us to this point has been immense."