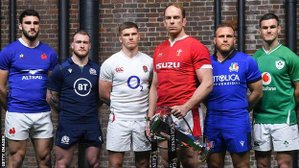 The Six Nations has confirmed the dates for the outstanding fixtures from the 2020 men's and women's championships.

The Six Nations has confirmed the dates for the outstanding fixtures from the 2020 men's and women's championships.

Both competitions were suspended in March amid the coronavirus pandemic with four matches in the men's event to be completed and six in the women's.

Ireland will face Italy at the Aviva Stadium on 24 October to resume the men's tournament.

The last round of the competition, involving all six teams, will take place on 31 October.

Wales will face Scotland at a venue yet to be confirmed, Italy will host England at the Stadio Olimpico and France will play Ireland at the Stade de France.

England are top of the standings in the men's competition with 13 points, ahead of France on points difference.

The remaining fixture between Italy and Scotland will be played on 5 December.

England also lead the women's competition, eight points ahead of France, who have a game in hand.

Six Nations said it had prioritised "the health and safety of players, associated staff and supporters" in rescheduling the matches.

"We remain in close contact with all relevant authorities across the respective jurisdictions to ensure these matches take place in a safe environment and we will announce further details of health and safety protocols and guidance on spectator attendance in due course," it added.

Wales will have to host their home fixtures away from the Principality Stadium after chief executive Martyn Phillips confirmed there will be no more international matches at the ground this year because it is being used as a temporary hospital during the coronavirus pandemic.

World Rugby approved a new temporary international window to allow the Six Nations to be completed.

The 2020 men's Autumn Tests are set to be replaced by an eight-team tournament in which the Six Nations sides will be joined by Japan and Fiji, which will begin on 14 November.