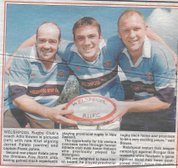 Welshpool made a fantastic signing when Jarrod Parlato joined the club from the Athletic club in Levin, New Zealand.

Pizza's first game for the club was an away game against Bangor, a side we hadn't beaten for the previous seven seasons.

Super Welshpool secured their first win at unbeaten Bangor in over seven years with an impressive display from their front five players.

New Kiwi signing Jarrod Parlato led the way along with Andrew Ingram and Alan Tudor as the Pool forwards produced a stirring display. The visitors opened the game with all guns blazing as prop Ingram scored from a lineout on 10 minutes for centre Frank Johns to convert.

They continued to dominate the early exchanges but Bangor battled back to score their first try between the posts which was easily converted.

Pool survived a period of pressure and Parlato made a twenty yard run from a scrum to set up number eight Paul Arnold for his third try in three matches.

The visitors regained momentum and another scrum in the middle resulted in wing Steve Beard running clear to score for Johns to convert. Pool stepped up another gear after the break and superb handling resulted in prop Tudor crossing between the posts for the try of the game and a well deserved victory for Pool on the road.