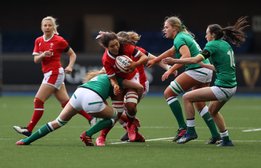 Wales Women got beaten 45-0 by a strong Ireland side in their second Six Nations clash of the season at the Cardiff Arms Park.

Thanks to WRU for picture and report

Despite the scoreline Wales showed tremendous character in the second-half to give head coach Warren Abrahams hope for the future. Ireland may not have played a game of rugby for well over a year but there were no signs of rustiness as they began the game like a house on fire. An incisive break from outside-half Hannah Tyrrell put the visitors deep in the Wales 22, with the ball recycled for Eimear Considine to score.

Wales had no answer to the intensity of their visitors with Ireland wing Beibhinn Parson’s crossing for two tries in the space of four minutes. It’s unlikely you’ll see a better individual try than her first all championship as she brushed off a weak tackle from Wales full back Robyn Wilkins, before showing great pace to run in unopposed from 50 metres out.

Her second score was far simpler as she was found unmarked by Tyrrell who executed a brilliant cross kick for Parsons to ground the ball. Quite frankly Wales had no defence as Ireland players eased their way through what some would call an attempt at tackling.

And full-back Eimear Considine effectively jogged past five Welsh defenders before turning inside to score their third which put her side 24-0 up after a mere 20 minutes. Powerful inside centre Sene Naoupu scored their fifth try as she crashed over from short range before Lindsay Peat had a try disallowed meaning the visitors led 31-0 lead at the interval.

Wales were a bit more stubborn in the second-half but Ireland’s pack ensured the visitors dominated territory and possession. To their credit the hosts refused to throw in the towel and there was no scorers either way in the third quarter of the game, as Warren Abrahams side showed some pride at least. Ireland took their foot off the gas in the second-half and didn’t have same fluidity as they had in the first forty minutes of this test match.

Aoife McDermott thought she had scored Ireland’s first try of the second-half after powering over from short range but upon referring the decision to the television match official the try was disallowed as the grounding was short. But they didn’t have to wait long as blindside flanker Dorothy Wall showed tremendous strength to smash her way over the line at the far left-hand corner, after a period of sustained pressure from the visitors.

And Tyrrell scampered over for Ireland in the last play of the game to rub further salt into Wales’ wounds in Cardiff.