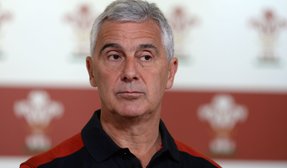 The Welsh Rugby Union are set to announce a new chairman next week with Ieuan Evans and Rob Butcher the two candidates for the position.

Gareth Davies' reign as chairman came to an end after he lost his place on the governing body's National Council.

Ex-Wales captain Evans was elected to the council in his place while Butcher has been WRU board member since 2015.

"The two candidates have a lot of rugby history behind them," interim chief executive Steve Phillips said.

Evans scored 33 tries in 72 appearances for Wales and also represented the British and Irish Lions on three tours.

A retired school teacher, Butcher has had a long association with Bargoed RFC, as a player and as a member of the club's committee.

The successful candidate will succeed former Wales fly-half Davies, who stepped down following the WRU's Annual General Meeting in October.

"It's a fundamental role of importance to the WRU," Phillips added.

"It's not without its challenges but I think both candidates recognise what the challenges are, which is frankly half the battle.

"They will need to hit the ground running and like all companies the new chair and the CEO have to be very tight and very closely aligned."