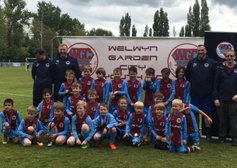 Our first ever tournament proved to be a fantastic success

We held our first ever tournament on Mayday Bank holiday.

Club chairman, Kevin Murphy, said: “We were hoping that the event would go well but it exceeded all our expectations.

“Several participants told us that it was the most organized tournament that they had ever attended, which was great to hear.

“A huge amount of effort went into organising the tournament and it was brilliant that the hard work of all our highly committed volunteers was rewarded.

“It was certainly a long day, but seeing the smiling faces of around 700 players on the day was a reward in itself.”

One of the tournament finals was competed between tow of our teams, and eventually decided on penalties. Kevin added the togetherness of all the players from both sides was there for all to see.

“After the medals had been awarded it was impossible to tell in the joint-team photo which players had won and which had lost,” he added.

“These are exactly the values that we are trying to instill into all our players and so was a very proud moment for us all.”